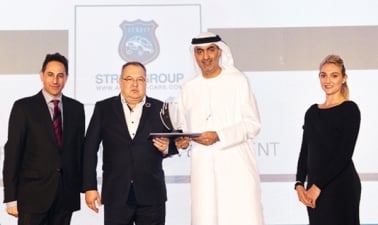 STREIT Group once again proved its metal, through dedication and high reliability, and received the honorific award for the fastest growing company of the year 2015. Under the patronage of His Highness Sheikh Ahmed bin Saqr Al Qasimi, STREIT has received this recognition for the hard work of its leaders and the ever progressing environment it poses.

Saqr Al Qasimi said (for the companies who have won): “Each of them deserves respect and recognition for setting the bar of excellence in their respective fields. We are very proud to have played an instrumental role in shaping exceptional companies within the business-friendly environment of RAK FTZ.”

Ras Al Khaimah Free Trade Zone (RAK FTZ), the investment home of more than 8 600 international companies, has announced the winners of its 2015 Business Excellence Awards, which celebrates the remarkable achievements of the free zone’s most outstanding clients.

STREIT Group of companies is the largest production network for the manufacturing of armoured vehicles and military vehicles in the world. The RAK FTZ Excellence Award honours STREIT’s RAK production plant, which in itself is the largest privately owned armoured vehicle manufacturing plant in the world. STREIT produces vehicles in 12 locations around the globe, including Canada, United States, Jordan, Turkey and Pakistan, among others.

With 25 offices around the globe, STREIT Group boasts a market share of 17% of the global armoured vehicle supply. With a joint production capacity of over 400 vehicles a month, STREIT caters to a clientele that spans more than 103 countries.

“The year 2015 came with its challenges, and we struggled to understand the perils and the fluctuations of the global market in the first quarter. However, we employed vigorous tactics and contingency planning, and we recovered quickly. With aggressive management, a dedicated production team and a hyperactive commercial and financial team, we proved that there is no substitute for dedication and hard work. STREIT Group thanks the RAK FTZ management and specifically His Highness Sheikh Ahmed bin Saqr Al Qasimi for recognising our efforts, and we pledge only to progress further and exceed expectations of our clients and associates alike.”

2018 off to a good start for Streit Group