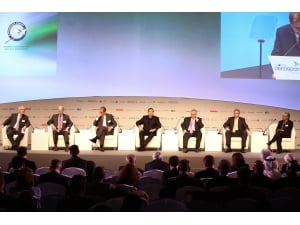 Paramount Group, Africa’s largest privately-owned defence and aerospace business, called for stronger defence industrial co-operation between the defence and aerospace industries of Africa and the Middle East at the world’s most important gathering of defence, aerospace and aviation leaders during the second Global Aerospace Summit, which took place on 7-8 April in Abu Dhabi.

Ivor Ichikowitz, Paramount Group Founder and Executive Chairman, is a key speaker at the summit and will participate in a panel of top industry leaders including the presidents and CEOs of Thales, BAE Systems, Northrup Grumman and Raytheon to debate the topic: “Can investment in aviation, aerospace, space and defence industries act as a catalyst for industrialisation?

“In South Africa, we have a strong developed defence and aerospace industry. We have the capability to compete effectively with Europe and the US. Our industry has built a track record over many decades for groundbreaking innovations and technologies. Some of these technologies have been adopted by defence forces in the Middle East. But there are many more opportunities for strong partnerships that will result in technology transfer, skills development and job creation,” says Ichikowitz.

“South Africa is a natural defence partner for countries in the Middle East. We are actively developing partnerships that will drive industrialisation through the establishment of defence industrial capability across the Middle East. The region is moving away from being just consumers of defence and aerospace technologies to the manufacture of its own products and technologies. It is here where our regions can find important synergies that will act as a catalyst for innovation and industrialisation,” says Ichikowitz. “There are many exciting developments in Africa’s aerospace industry – from Africa’s first locally designed and developed fixed wing aircraft, to groundbreaking innovations in aerospace manufacturing, we are continuing to surprise the world with the unique capabilities and skills that our continent has to offer,” adds Ichikowitz.

Ichikowitz is the only speaker representing the African continent at the Global Aerospace Summit. As one of Africa’s leading industrialists and thought leaders on the role that the defence and aerospace industries play in driving industrialisation, Ichikowitz will bring unique insights from a developing world perspective by addressing the following issues:

This main session of the summit will look at whether an investment in aerospace, space and defence industries can be used to kick-start industrialisation, and will examine the role of international partnerships in this process. The panel will also discuss how best to build a sustainable industry that delivers long returns and builds term on existing strengths – creating new capabilities. The discussion will focus on themes such as effective government policy and offset regulation.

Paramount Group is currently building Africa’s first ever aircraft – AHRLAC – which is a surveillance and reconnaissance aircraft ideal for the military requirements of the Middle East and the rest of the world. Paramount is the largest shareholder in Aerosud, which is also a strategic risk sharing partner in the new Airbus A400M military transport aircraft. Part of Paramount’s offering is the modernisation and enhancing of mission capabilities of fixed wing and rotary aircraft for Mirage F1, BAE Hawk, Russian helicopters Mi 17, Mi 24 and Eurocopter. Paramount also produces its own range of world-class unmanned aerial systems.