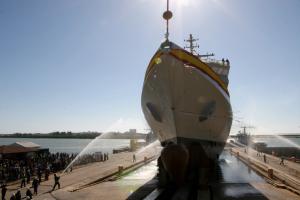 The ship is the fourth of an initial series of four that Navantia is building for the Spanish Navy in line with the Executive Order signed on 31st of July 2006 and which it is going to be followed by a new series of 5 units. This ship is expected to be delivered by the middle of 2012.

She is a moderately sized, high performance ship with great versatility regarding missions, enjoys a high level of system commonality with other Spanish Navy ships and has low acquisition and life cycle costs. Her main missions are:

The new series of five has already been announced and is expected to be signed shortly. The construction will start by the end of 2011, providing occupation in the shipyard until 2017.