High-Gain Omni-directional antennas are used in situations where the direction of the receiving antenna is not static or known.  A typical situation is where antennas are mounted on a mobile platform like a vehicle or vessel.

In any communication system, the quality and throughput that can be attained through a link is highly dependent on the signal strength and quality of the signal between the receiving and transmitting antennas.

Antennas play a crucial role in the performance of any wireless communication link.  High-gain antennas can be used to provide additional power in the link budget in general, due to the fact that antennas effectively amplify the signal being fed into the antenna.

It should be noted however, that antennas provide the additional amplification in a completely different way than a powered amplifier.  Antennas, being passive devices, can only amplify the input signal by focussing the beam in a particular direction.  Therefore, there will always be a trade-off between the gain and the beam-width over which this gain can be achieved.  For example, a narrower beam will provide more gain and vice-versa.  This trade-off also exists in omni-directional antennas.  Since omni-directional antennas are required to provide signal over a 360o beam in the azimuth plane, the additional gain can only be achieved by reducing the beam-width in the elevation plane. 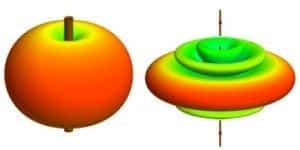 Looking at the above radiation patterns, it should be noted that a single dipole has a radiation pattern with a wide beam and gain of about 2.2dBi.  The second figure shows an array of four dipoles identical to the first.  By stacking four of these dipoles and feeding each dipole in phase, the gain of the array increases to 7.7dBi, but over a much narrower elevation beam.  In addition to the narrower beam, additional side-lobes are created that are separated by deep nulls in the pattern.  These nulls imply that, at certain angles of incidence, the antenna will receive practically no signal at all.  It is therefore important to note the positions of these nulls when designing a system where an omni antenna is required.

The beam-widths of antennas are normally expressed as the angle over which the gain is within 3dB of the maximum gain in the main lobe. It is often useful to also find the angle of the first null in the pattern.

Comparison of a 5dBi vs 8dBi Omni-Directional Antenna

The gain of an antenna comes from stacking a number of similar elements and feeding them in-phase.

The radiation pattern below shows the first-null and 3dB beam-widths of a simulated antenna: The second antenna would use half the number of antenna elements and will have a gain of nominally 3dB less than the first.

The table below summarize the gain and beam-widths of the two antennas:

It should be noted that both the 3dB and the first-nulls’ beams are doubled when the gain is halved (i.e. 3dB lower), exactly in line with expectations.

Vehicle parked on a sidewalk curb

A typical sidewalk curb in South Africa is about 150mm in height and it is not uncommon for bigger vehicles to park with two wheels on the sidewalk.  Assume that the vehicle is about 2m wide. 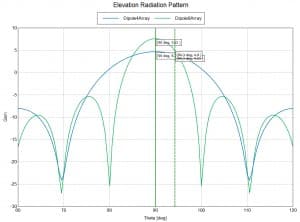 At an incline of 4.3o, the 8dBi antenna already lost 2.73dB relative to the maximum gain, while the 5dBi antenna only lost 0.85dB. 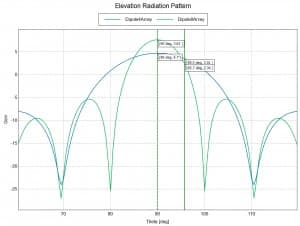 At an incline of 10o the 8dBi reaches its first null and the effective gain of the antenna towards the receiver is effectively non-existent.  A vehicle parked in this orientation will completely lose connectivity.  While it is not typical for a vehicle to be parked in this orientation, it is not unusual for a vehicle to reach an incline of 10o or more for short instances during off-road excursions.  The signal strength seen at the receiver will vary wildly over short periods (more than 20dB in less than a second).  Some communication systems will attempt to switch to lower modulation schemes, and if not designed to deal with these quick changing signal levels, keep switching continuously to the point where throughput is significantly reduced.

High-gain omni-directional antennas achieve additional gain at the expense of elevation beam width. In static installations, the reduced beam-width is generally acceptable, but one needs to practice extreme caution when using them in mobile applications.

For more information on our range of High-Gain Omni Antennas, visit our Product Section here