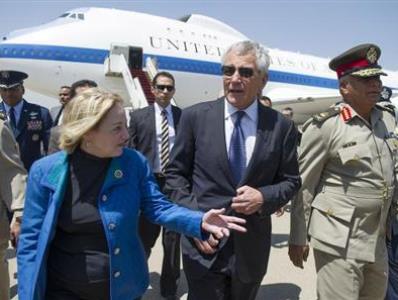 The White House voiced confidence in the U.S. ambassador to Egypt, Anne Patterson, who has come under fire for criticism she made of planned rallies against the Muslim Brotherhood before the military takeover in Egypt a week ago.

Patterson’s remarks were covered extensively by local media and were denounced by Egyptian opposition leaders who accused her of interference in Egypt’s internal affairs.

At his daily news briefing, White House spokesman Jay Carney said Patterson is “absolutely” seen as an effective advocate for U.S. policy in Egypt, Reuters reports.
“She’s an excellent career diplomat, has served admirably in a variety of posts prior to Egypt and Pakistan. She’s doing a great job,” Carney said.

He rejected the notion that by engaging with the Egyptian government she was picking sides in Egypt. She worked with ousted Egyptian President Mohamed Mursi and will work with the next democratically elected civilian government when it is in place, he said.
“She’s an expert in the area and a supremely skilled diplomat,” Carney said.