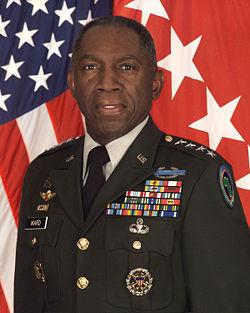 The Pentagon has activated the United States Africa Command (Africom) that the US says will lead their efforts to foster better relations between Washington and this continent, while detractors fear it will lead to American military intervention in the region.
US President George W Bush announced the creation of Africom in February last year. The command, led by US Army General William E. “Kip” Ward became fully operational today.
On the eve of its official launch, US Deputy Assistant Secretary of Defense for African Affairs Theresa Whalen said the command “will be the most visible element of the US goal to strengthen ties with Africa through sustained engagement.”
Africom combines under Ward responsibilities previously awkwardly shared by US European Command (Eucom), US Pacific Command and US Central Command.
In an interview with America.gov, Whalen said America`s relationship with Africa will be easier as a result of Africom`s systematic focus on the entire continent, with the exception of Egypt, and its island nations.
Africom will be able to provide effective peacekeeping training and technical support for the Africa Union’s African Standby Force, which is developing a peacekeeping standby brigade for each of the continent`s five regions.
Whalen says this effort dovetails well with Washington`s objective of helping African nations provide their own security by being “a more effective tool” to deal with famine, disease, poverty, weapons proliferation, piracy and conflict by building the capacity of partner nations’ land and marine forces.
Restrictions on what the US military can do in Africa have not changed with the creation of the new command. “So the fact that we created a new organizational structure to implement security strategy in Africa,” she said, “hasn’t changed any of the rules that governed the old organizational structures.”

Whalen dismisses the idea that the command represents what some critics have called the “militarisation” of US foreign policy in Africa. She says “people will be surprised that AFRICOM’s leadership [half military and half civilian] will be more cautious about looking for military solutions to problems in Africa.”

The command is currently headquartered in Stuttgart, Germany, where Ward has two co-deputies: Ambassador Mary Carlin Yates, who has served in Burundi and Ghana in charge of civil-military activities and Navy Vice Admiral Robert Moeller as coordinator for operational activities.

Whalen says Liberia has publicly offered to host some part of the command. But in congressional testimony, she has said there are no plans to establish large, permanent military bases in Africa. Several other countries, including SA, have publicly rejected hosting Africom.

At present some 1500 military and contractor personnel are based in Djibouti, where they “have been well received.” A small US force will next year deploy to Swaziland for a “Medflag” medical training exercise. Medflag was started by Eucom some years ago and will continue under Africom. SA hosted the 2004 edition.

Fast facts
·         Africom is one of six of the Defense Department’s regional military headquarters. The other five regional commands and their locations are: US Central Command, Tampa, Florida; US Pacific Command, Honolulu, Hawaii; US European Command, Stuttgart, Germany; US Northern Command, Colorado Springs, Colorado; and US Southern Command, Miami, Florida.
·         Africom will have administrative responsibility for US military support to US government policy in Africa, to include military-to-military relationships with 53 African nations.
·         Chain of Command: Ward reports to the US Secretary of Defense, who reports to the President of the United States. In individual countries, US Ambassadors continue to be the US president’s personal representatives in diplomatic relations with host nations.

Africom mission: “United States Africa Command, in concert with other US government agencies and international partners, conducts sustained security engagement through military-to-military programs, military-sponsored activities, and other military operations as directed to promote a stable and secure African environment in support of US foreign policy.”