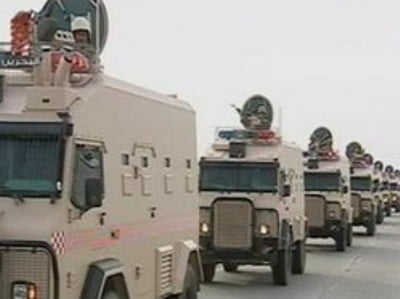 Saudi Arabia sent troops into Bahrain to help calm weeks of protests by the Shi’ite Muslim majority, a move opponents of the Sunni ruling family on the island called a declaration of war.

Analysts saw the troop movement into Bahrain, home to the US Navy’s Fifth Fleet, as a mark of concern in Saudi Arabia that concessions by the country’s monarchy could inspire the conservative Sunni-ruled kingdom’s own Shi’ite minority.

About 1,000 Saudi soldiers entered Bahrain to protect government facilities, a Saudi official source said, a day after mainly Shi’ite protesters overran police and blocked roads, Reuters reports.
“They are part of the Gulf Cooperation Council (GCC) force that would guard the government installations,” the source said, referring to the six-member bloc that coordinates military and economic policy in the world’s top oil-exporting region.

Bahrain said on Monday it had asked the Gulf troops for support in line with a GCC defence pact. The United Arab Emirates has said it would also send 500 police to Bahrain.

Witnesses saw some 150 light armoured troop carriers, ambulances, water tankers and jeeps cross into Bahrain via the 25-km (16-mile) causeway and head towards Riffa, a Sunni area that is home to the royal family and military hospital.

Bahrain TV later showed footage it said was of advance units of the joint regional Peninsula Shield forces that had arrived in Bahrain “due to the unfortunate events that are shaking the security of the kingdom and terrorising citizens and residents.”

It later said a second wave of forces had arrived.

Analysts say the largest contingent in a GCC force would come from Saudi Arabia, worried about spillover to Shi’ites in its own Eastern Province, the centre of its oil industry.

Bahraini opposition groups including the largest Shi’ite party Wefaq said the move was an attack on defenceless citizens.
“We consider the entry of any soldier or military machinery into the Kingdom of Bahrain’s air, sea or land territories a blatant occupation,” they said in a statement.
“This real threat about the entry of Saudi and other Gulf forces into Bahrain to confront the defenceless Bahraini people puts the Bahraini people in real danger and threatens them with an undeclared war by armed troops.”

The White House said the United States did not consider the arrival of Saudi security forces to constitution and invasion. It urged the Bahrain government, however, to exercise restraint in upholding order.

The arrival of the Saudi forces came after mostly Shi’ite demonstrators overwhelmed Bahraini police on Sunday and blocked the highway to the main financial district in the most violent confrontations since troops killed seven protesters last month.

Those barricades were still up on Monday, with protesters checking cars at the entrance to the Pearl roundabout, the focal point of weeks of protests. On the other side of the same highway, police set up a roadblock preventing any cars moving from the airport towards the financial area.

In areas across Bahrain, vigilantes, some armed with sticks or wearing masks, guarded the entrances to their villages. Sectarian clashes broke out in Madinat Issa, witnesses said.
“We will never leave. This is our country,” said Abdullah, a protester, when asked if Saudi troops would stop them. “Why should we be afraid? We are not afraid in our country.”

Bahrain has been gripped by its worst unrest since the 1990s after protesters took to the streets last month, inspired by uprisings that toppled the leaders of Egypt and Tunisia.

Thousands are still camped out at the Pearl roundabout, having returned since the army cleared out the area last month.

Washington has urged Bahrain to use restraint and repeated the call to other Gulf nations on Monday.
“We urge our GCC partners to show restraint and respect the rights of the people of Bahrain, and to act in a way that supports dialogue,” White House spokesman Tommy Vietor said.

Any intervention by Gulf Arab troops in Bahrain is highly sensitive on the island, where the Shi’ite Muslim majority complains of discrimination by the Sunni Muslim royal family.

Most Gulf Arab ruling families are Sunni and intervention might encourage a response from non-Arab Iran, the main Shi’ite power in the region. Accusations already abound of Iranian backing for Shi’ite activists in Bahrain — charges they deny.
“The Bahraini unrest could potentially turn into regional sectarian violence that goes beyond the borders of the particular states concerned,” said Ghanem Nuseibeh, partner at consultancy Cornerstone Global.

Iran urged Bahrain not to allow foreign interference and urged the government not to use force against protesters.
“Using other countries’ military forces to oppress these demands is not the solution,” Foreign Ministry official Hossein Amir Abdollahian told the semi-official Fars news agency.

In a sign that the opposition and the royals may find an 11th-hour solution, the opposition groups said they had met the crown prince to discuss the mechanism for national dialogue.

Even if talks are successful however, the opposition is increasingly split and hardline groups may keep up protests.

Wefaq is calling for a new government and a constitutional monarchy that vests the judicial, executive and legislative authority with the people. A coalition of much smaller Shi’ite parties are calling for the overthrow of the monarchy — demands that scare Sunnis who fear this would benefit Iran.