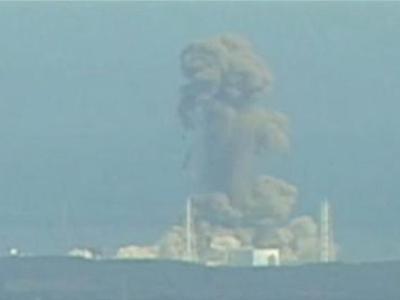 Japan warned radiation levels had become “significantly” higher around a quake-stricken nuclear power plant after explosions at two reactors, and the French embassy said a low-level radioactive wind could reach Tokyo within hours.

Prime Minister Naoto Kan urged people within 30 km (18 miles) of the facility north of Tokyo to remain indoors and conserve power, underscoring the dramatic escalation of Japan’s nuclear crisis, the world’s most serious since the Chernobyl disaster in Ukraine in 1986.

As concern about the crippling economic impact of the nuclear and earthquake disasters mounted, Japanese stocks fell as much as 14 percent before ending down 9.5 percent, compounding a slide of 7.6 percent the day before. The two-day fall has wiped some $620 billion (385 billion pounds) off the market, Reuters reports.

The French Embassy in Tokyo warned in an 1 a.m. British time advisory that a low level of radioactive wind could reach the capital — 240 km (150 miles) south of the plant — in about 10 hours.

Radiation levels in the city of Maebashi, 100 km (60 miles) north of Tokyo were up to 10 times normal levels, Kyodo news agency said. Only low levels were found in the capital itself, which so far were “not a problem,” city officials said.
“There has been a fire at the No. 4 reactor and radiation levels in the surrounding area have heightened significantly. The possibility of further radioactive leakage is heightening,” a grim-faced Kan said in an address to the nation.
“We are making every effort to prevent the leak from spreading. I know that people are very worried but I would like to ask you to act calmly.”

Despite the plea for calm, residents rushed to shops in Tokyo to stock up on supplies. Don Quixote, a multi-storey, 24-hour general store in Roppongi district, sold out of radios, flashlights, candles and sleeping bags.

In a sign of mounting regional fears about the risk of radiation, China said it was strengthening monitoring, Air China said it had cancelled flights to Tokyo and the Japanese government announced a 30-km no-fly zone around the reactors.

Several embassies advised staff and citizens to leave affected areas. Tourists cut short vacations and multinational companies either urged staff to leave or said they were considering plans to move outside Tokyo.

Winds over the nuclear facility were blowing slowly in a southwesterly direction that includes Tokyo but will shift westerly later on Tuesday, a weather official said.

Japanese media have became more critical of Kan’s handling of the disaster and criticised the government and nuclear plant operator TEPCO for their failure to provide enough information on the incident.

Residents want information on the health risks.
“Very acute radiation, like that which happened in Chernobyl and to the Japanese workers at the nuclear power station, is unlikely for the population,” said Lam Ching-wan, a chemical pathologist at the University of Hong Kong.

But the blasts could expose the population to longer-term exposure to radiation, which can raise the risk of thyroid and bone cancers and leukaemia, he said. Children in foetuses are especially vulnerable.

Chief Cabinet Secretary Yukio Edano, talking of levels of radiation at the No. 4 reactor, said: “There is definitely a possibility that this could affect people’s bodies.”

Many of the worrying milestones mapped out by experts have been passed, with some workers having left the Fukishima Daiichi complex and people living within 30 km told to stay indoors.

There have been a total of four explosions at the plant since it was damaged in last Friday’s massive quake and tsunami. The most recent were blasts at reactors No. 2 and No. 4.

There was a real possibility of a leak in the No.4 reactor container, which houses the nuclear fuel rods, according to Murray Jennex, a professor at San Diego State University in California.

Concerns centre on damage to a part of the reactor core known as the suppression pool, which helps cool and trap the majority of cesium, iodine, strontium in its water. The nature of the damage was unclear, as was its impact on the containment structure, a thick steel vessel that surrounds the core.

Jennex said the crisis was worse that the Three Mile Island disaster of 1979.
“But you’re nowhere near a Chernobyl … Chernobyl there was no impediment to release, it just blew everything out into the atmosphere,” he said. “You’ve still got a big chunk of the containment there holding most of it in.”

Authorities had previously been trying to prevent meltdowns in the complex’s nuclear reactors by flooding the chambers with sea water to cool the reactors down.

A sudden drop in cooling water levels when a pump ran out of fuel had fully exposed the fuel rods for a time, an official said. TEPCO had resumed pumping sea water into the reactor early on Tuesday.

U.S. warships and planes helping with relief efforts moved away from the coast temporarily because of low-level radiation. The U.S. Seventh Fleet described the move as precautionary.

South Korea, Hong Kong, Singapore and the Philippines said they would test Japanese food imports for radiation.
“SCENE FROM HELL”

The full extent of the destruction from last Friday’s massive quake and tsunami that followed it was still becoming clear, as rescuers combed through the region north of Tokyo where officials say at least 10,000 people were killed.
“It’s a scene from hell, absolutely nightmarish,” said Patrick Fuller of the International Red Cross Federation from the northeastern coastal town of Otsuchi.

Kan has said Japan is facing its worst crisis since World War Two and, with the financial costs estimated at up to $180 billion, analysts said it could tip the world’s third-biggest economy back into recession.

The U.S. Geological Survey upgraded the quake to magnitude 9.0, from 8.9, making it the world’s fourth most powerful since 1900.

Car makers, shipbuilders and technology companies worldwide scrambled for supplies after the disaster shut factories in Japan and disrupted the global manufacturing chain.

About 850,000 households in the north were still without electricity in near-freezing weather, Tohuku Electric Power Co. said, and the government said at least 1.5 million households lack running water. Tens of thousands of people were missing.
“The situation here is just beyond belief, almost everything has been flattened,” said the Red Cross’s Fuller in Otsuchi, a town all-but obliterated. “The government is saying that 9,500 people, more than half of the population, could have died and I do fear the worst.”

Whole villages and towns have been wiped off the map by Friday’s wall of water, triggering an international humanitarian effort of epic proportions.

Estimates of the economic impact are now starting to emerge.

Hiromichi Shirakawa, chief economist for Japan at Credit Suisse, said in a note to clients that the economic loss will likely be around 14-15 trillion yen (106-114 billion pounds) just to the region hit by the quake and tsunami.

Even that would put it above the commonly accepted cost of the 1995 Kobe quake which killed 6,000 people.

The earthquake has forced many firms to suspend production and global companies — from semiconductor makers to shipbuilders — face disruptions to operations after the quake and tsunami destroyed vital infrastructure, damaged ports and knocked out factories.
“The earthquake could have great implications on the global economic front,” said Andre Bakhos, director of market analytics at Lec Securities in New York. “If you shut down Japan, there could be a global recession.”