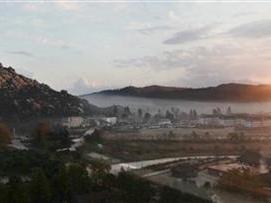 Reclusive North Korea gave South Koreans working at a jointly run tourism resort 72 hours to leave, saying time had run out to resolve a long-running dispute over what was once a symbol of cooperation between the rival Koreas.

The scenic Mount Kumgang resort has been closed since a North Korean soldier shot and killed a South Korean tourist there in 2008, drying up a lucrative source of hard currency for the impoverished North.

Pyongyang has suffered big losses due to the South’s “unilateral suspension” of operations at the resort, a spokesman for the North’s Guidance Bureau of Special Zone for International Tour of Mt. Kumgang, Reuters reports.

The North “has so far provided several opportunities for negotiations and made every sincere effort, advancing a variety of choices so that the properties may be dealt with according to the will of enterprises of the South side,” he said.
“This is not good,” said Chung-in Moon of Yonsei University in Seoul. “North Korea has been sending a very clear message, but our government has been delaying the decision.
“I don’t know why they have handled this situation like this.”

The resort — comprising hotels, restaurants and a golf course — was opened in 1998 during a decade-long period of rapprochement between the two Koreas, known in the South as the “Sunshine policy” years.

That period ended with the election in South Korea of conservative President Lee Myung-bak in 2008, who declared there would be no aid for the destitute neighbour until the North abandoned its nuclear arms program.

Inter-Korean ties have declined sharply in the past three years, hitting a low last year when 50 South Koreans were killed in two attacks and the North unveiled a uranium enrichment facility.

However, tensions have eased on the peninsula this year and a flurry of diplomacy has raised hopes for a resumption of regional talks on disabling the North’s nuclear program.

The North’s leader Kim Jong-il is currently visiting Russia’s Far East where he is due to meet Russian President Dmitry Medvedev later this week.

Analysts he is likely seeking economic aid and investment pledges from Moscow, mirroring similar requests made during a trip to China in May.

At its height, 300,000 South Koreans a year visited the Mt. Kumgang, generating tens of millions of dollars for the North Korean government.

After months of threats and counter-threats from both sides, Pyongyang said it would now “legally dispose” of South Korean assets from Mt Kumgang after Seoul failed to meet Friday’s final deadline to agree on asset disposal.

North Korea said the South Koreans working there had 72 hours to leave. Fourteen of its nationals were stationed at the complex as of Monday.
“We cannot accept this ultimatum and hold North Korea responsible for all of the consequences that may follow,” ministry spokesman Chun Hae-sung told reporters in Seoul.

The ministry would not say what its next move might be, but some media reports have said Seoul could take the issue to an international tribunal.

The resort was built by an affiliate of the South’s Hyundai Group at a cost of tens of millions of dollars. It has been visited by more than a million South Koreans.

Since the 2008 shooting, Seoul has demanded an investigation by the North, an apology and safety guarantees. Pyongyang has expressed regret and says that it is enough.

Pyongyang has said it wants to redevelop the complex into an international tourist destination, complete with casino, with an eye towards luring big-spending Chinese tourists.

The Utility of Assassination