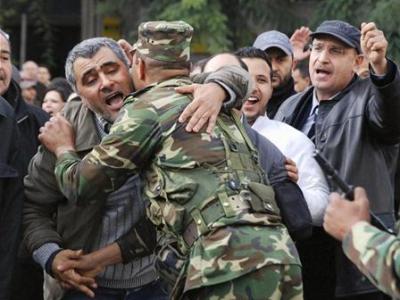 Tunisia has dissolved its hated security agencies and Egypt is reforming its own domestic spying system, giving hope to activists across the region who say the moves could herald the dawn of the real Arab revolution.

Internal security services in both countries are examples of the powerful police forces Arab autocrats have used to crush political life and which have played a role similar to that of the Stasi in the former East Germany.

Reformists say the next step is to follow Germany’s example by holding to account those who spied on them. They fear that failure to do so will allow remnants of the old order to re-establish themselves, risking a counter-revolution, Reuters reports.
“What is required, and now, is the urgent trial of the leadership of this apparatus. We ask for what happened in Germany,” said Ayman Nour, an Egyptian opposition figure who himself came under the close scrutiny of state security.

The people power which drove Hosni Mubarak from office on February 11 was unleashed against the state security apparatus earlier this month when protesters stormed its premises after word spread that officers were destroying documents.

The head of the agency has been arrested and is facing investigation for ordering the killing of demonstrators during the uprising against Mubarak. Another 47 of its personnel have been detained on suspicion of destroying documents.

The new interior minister has promised to put an end to the role state security played in citizens’ daily lives.

Across the Middle East, unaccountable security forces are seen as one of the major obstacles to the transparent government sought by protesters who have taken to the streets in an unprecedented wave of mass demonstrations.
“THE REAL REVOLUTION”

They have evolved into complex organisations with deep influence that employ armies of informants. Police abuses were instrumental in bringing Egyptians and Tunisians to the streets against Mubarak and Tunisia’s leader, Zine al-Abidine Ben Ali.
“It’s an incredible moment because one of the key challenges for any revolution is establishing accountability for security services and civilian oversight,” Houry said.
“That is more important and will have wider implications than getting rid of Ben Ali and Mubarak,” he added.

Powerful internal security forces have evolved across the Middle East.

Jordanian dissident Laith Shubailat once described the head of the intelligence, or “mukhabarat”, as the country’s “uncrowned king”. “They interfere in everything,” he said.

Massoud Akko, a Syrian journalist, said his articles would typically result in summons from at least three separate security agencies. “All would ask the same questions,” said Akko, a Syrian Kurd who has written on human rights.

He fled Syria in 2010, fearing he would be put on trial over a series of articles critical of the government. He was speaking by telephone from Norway, where he has been granted asylum.
“The most junior member of the security forces in Syria blackmails citizens through intimidation,” he said. Everything from appointments of senior officials to wedding parties needs the approval of the security apparatus, he added.
“DIVINE POWERS”

Egypt’s new government has apologised for “violations” by state security and said its mandate will in future be restricted to combating terrorism and espionage.

But it has yet to announce the dissolution of state security as demanded by reformists, who are worried that the remnants of the force pose a threat to their revolution.
“Those officers were the masters of Egypt, possessing everything, divine powers,” said Nour, the Egyptian opposition figure who ran against Mubarak in a 2005 presidential election.
“I imagine that they will not surrender easily,” Nour said.

After coming second to Mubarak, Nour was jailed in 2005 on forgery charges widely seen as trumped up. He has described the case against him as retribution for his challenge to Mubarak.

Nour said his supporters had salvaged dossiers from state security premises showing how the agency had spied on his neighbours. One contained details such as the type of electricity metre installed at his apartment.

While many state security documents have been lost, there is a chance those which were shredded could be salvaged. In a pilot project, German archivists are reassembling documents shredded by the Stasi.