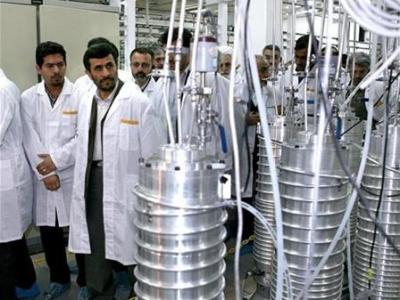 A UN nuclear watchdog report due this week is expected to show recent activity in Iran that could help in developing nuclear bombs, including intelligence about computer modelling of such weapons, said Western diplomats.

“There are bits and pieces of information that go up through 2010,” one Vienna-based diplomat said.

If confirmed in this week’s keenly awaited document by the International Atomic Energy Agency, it could stimulate new debate about a controversial U.S. intelligence assessment in 2007 that Iran had halted outright “weaponisation” work in 2003, Reuters reports.

It would heighten Western suspicions that Iran is resolved to pursue at least some of the research and development (R&D) applicable to atom bombs, even if Tehran has made no apparent decision to actually build them, as diplomats believe.
“There is still evidence there where I think the agency will be in a position to say that they have serious concerns coming up to the present day,” said another envoy in the Austrian capital, where the IAEA is based.

But Western officials and experts suggested that research and experiments pointing to military nuclear aims may not have continued on the same scale as before 2003, when Iran started coming under increased Western pressure over its nuclear work.
“Iran is understood to have continued or restarted some R&D activities since then,” said nuclear proliferation analyst Peter Crail of the U.S.-based Arms Control Association, a research and advocacy group.

Iran denies accusations it is seeking nuclear arms, saying they are based on forged documents. It says its uranium enrichment programme is aimed at generating electricity so that it can export more of its abundant oil.

Many conservative experts criticised the 2007 findings as inaccurate and naive, and U.S. intelligence agencies now believe Iranian leaders have resumed closed-door debates over the last four years about whether to build a nuclear bomb.
“I suspect that the new IAEA report will play into the hands of U.S. conservative and Israeli critics of the 2007 NIE (National Intelligence Estimate), who had accused the U.S. intelligence community of playing down evidence of clandestine nuclear weapons activities in Iran,” said Shannon Kile of the Stockholm International Peace Research Institute think tank.
“SERIOUS SCIENTIFIC INTENT”

The IAEA report, due to be submitted to member states in the next few days, is expected to provide new evidence of explosives and physics research suggesting Iran is seeking the capability to design nuclear weapons.

Some of the activities have little application other than atomic bomb-making, including computer modelling of a nuclear weapon, sources familiar with the document said.

They said it would support intelligence reports that Iran built a large steel container at the Parchin military complex southeast of Tehran for the purpose of carrying out tests with high explosives usable for a nuclear chain reaction.
“It is a forensic body of evidence that shows some serious scientific intent,” one of the Western diplomats said.

In February, U.S. Director of National Intelligence James Clapper said Iran was “keeping open the option to develop nuclear weapons in part by developing various nuclear capabilities that better position it to produce such weapons.”

Crail said Clapper’s statements were not “inconsistent with the notion that some weapons-related R&D has resumed which is not part of a determined, integrated weapons-development programme of the type that Iran maintained prior to 2003.”

Mark Fitzpatrick, a director of the International Institute for Strategic Studies, said it was too early to say whether the IAEA report will cast doubt on the 2007 NIE assessment.
“The U.S. intelligence community already has the information in the IAEA report,” Fitzpatrick said, adding that Clapper as recently as March confirmed the belief that Iran had not made a decision to restart its nuclear weapons programme.
“The apparent disconnect between that statement and the leaks that have come out about the IAEA report probably pertain to the time frame of the weapons research and development and the level and scale of the activity that the IAEA apparently believes continued after 2003,” he said.