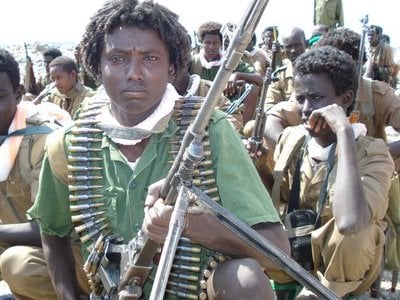 An Eritrean rebel group claims it killed 17 intelligence agents in a strike against a government increasingly painted as a pariah state by African and Western powers.

“Our fighters on Monday attacked a camp belonging to the 28th sub-division and killed (or) wounded 37 government intelligence members,” Yasin Mohamed, spokesman for the rebel Red Sea Afar Democratic Organisation (RSADO) told Reuters.
“After the strike we took control of the military camp for over 4 hours and we counted 17 bodies, all belonging to a government intelligence unit.”

There was no immediate comment from the Eritrean government and the report could not be independently confirmed.

The UN Security Council accuses Asmara of providing funds and weapons to Islamist insurgents in Somalia where violence has killed 21 000 people since the beginning of 2007. The council slapped sanctions on Eritrea last December.

Eritrea has repeatedly denied the allegations and accuses Washington and arch-foe Ethiopia of fabricating lies.

The two Horn of Africa neighbours have had long running hostilities and tensions simmer along their common border due to a dispute over the frontier.

The same rebels said in December they had killed 25 government soldiers and wounded at least 38 more in ambushes on two military camps.

Eritrea denied that, saying it had killed 10 Ethiopian troops after they attacked Eritrean positions.

Rebel leader Ibrahim Haroun, who comes from the Afar ethnic group and says they are persecuted by Eritrea told Reuters they would continue attacks.
“We will intensify our military attacks until the rights and self-determination of the Afar people are assured,” he said. “We call on all Eritrean opposition forces to reunite and join us in the struggle to overthrow the regime once and for all.”