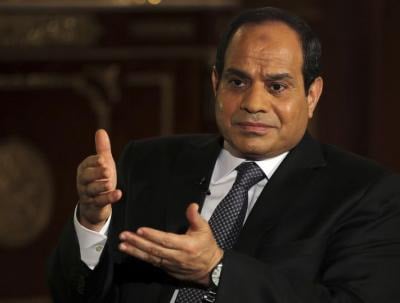 “Be alert to what is happening in the region … This region is being destroyed right now and we should not let this happen,” Sisi said in a televised speech.
“This matter concerns not just the Arab world. It concerns the entire world,” he said, naming the United States, Russia, China and Europe.

Militants have long challenged pro-Western Arab countries, and Egypt itself faces an Islamist insurgency based in the Sinai peninsula.

But a lightning advance by the Islamic State through major oil producer Iraq has rung alarm bells from Cairo to Washington.

The al Qaeda offshoot declared itself a “caliphate” last month, weeks after overrunning the northern city of Mosul and seizing swathes of land north and west of the capital.

Top U.S. defence officials said last week Iraq’s security forces were able to defend the capital, Baghdad, but would have difficulty going on the offensive to recapture lost territory, mainly because of logistic weaknesses.

Sisi did not name the Islamic State in his speech, but the mention of “countries that are being destroyed and divided in the name of religion” was a clear reference to their actions in Iraq and neighbouring Syria.

Sisi told Reuters before his election in May that Egypt needed U.S. support to combat militants, who have stepped up attacks on Egyptian security forces since the army toppled President Mohamed Mursi of the Muslim Brotherhood just over a year ago, killings hundreds in bombings and shootings.

The former army chief warned that the Sinai could turn into a base for “terrorism”, destabilising Egypt and the region.

Most of Sisi’s speech focused on efforts to revive the economy and fix state finances, which have been battered by more than three years of political turmoil.

He said his government’s decision to cut subsidies for fuel and electricity were necessary to improve Egypt’s budget deficit, which is set to hold at 10 percent of economic output in the next three years.

Gulf Arab allies opposed to the Brotherhood have extended more than $12 billion in cash and petroleum products to help Egypt stave off economic collapse. But Sisi said reforms, not aid, were needed to ensure long-term stability.
“Our brothers stood by our side,” he said. “But for how long and then what?”