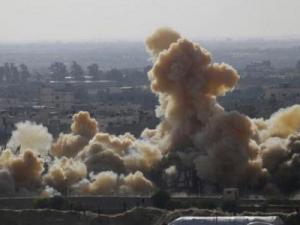 Ten Egyptian soldiers including a colonel were killed in a suicide bomb attack on an army checkpoint in northern Sinai, security sources said.

The sources said two vehicles were detonated while passing a checkpoint between Rafah and Sheikh Zuweid. No group has claimed responsibility for the attack.

Egypt faces an Islamist insurgency led by Islamic State in North Sinai, where hundreds of soldiers and police have been killed since 2013, when the military ousted Islamist president Mohamed Mursi after mass protests.