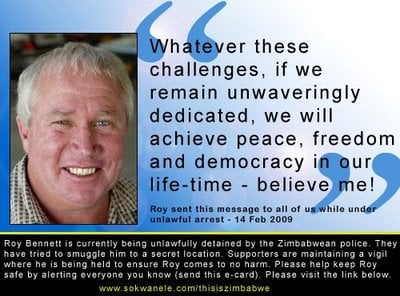 Zimbabwe’s attorney general said yesterday the state would move to have its key witness in the terrorism trial of an ally of Prime Minister Morgan Tsvangirai impeached for giving contradicting evidence.

The trial of Roy Bennett who faces a possible death sentence on charges of illegal possession of arms for purposes of committing terrorism, banditry and sabotage resumed with chief state witness Peter Hitschmann testifying.

Bennett, treasurer-general in Tsvangirai’s Movement for Democratic Change (MDC), has denied the charges and accuses President Robert Mugabe’s ZANU-PF party of political persecution and trying to stop him from taking up the post of deputy agriculture minister.

Yesterday, Hitschmann, 49, a former police officer and arms dealer, disowned some of the weapons attributed to him by the state as well as e-mail print-outs purportedly showing communication between him and Bennett.

The state says Hitschmann is an accomplice witness and its case hinges on confessions said to have been made by the arms trader implicating Bennett in 2006.

Hitschmann has disowned the confessions, including a video recording, saying he was tortured to make the statements.

Attorney General Johannes Tomana told High Court judge Chinembiri Bhunu that Hitschmann’s testimony was different from statements he made on his arrest, implicating Bennett, and would move to have him impeached by the court.
“Impeachment procedures are meant to deal with a scenario where an accused witness is clearly showing that he is unfavourably indisposed to the state case in favour of the defence,” Tomana said.

Asked by judge Bhunu if the state wanted to impeach Hitschmann, Tomana said: “That is the foundation we are laying.”

Hitschmann told the court he was a registered arms dealer when he was arrested in March 2006 and collected firearms from white commercial farmers who were forced off their land.

Many white commercial farmers were reservists in the then white-led Rhodesian army and kept arms for use against black liberation forces in the 1970s.

Hitschmann was jailed for illegal possession of dangerous weapons in 2006 but the court threw out the more serious terrorism charges and also found that he had licences for most of the weapons that he kept.
“I acted as a conduit and would accept those firearms, sell such weapons whose papers were in order on a commission basis and hand in all firearms not properly registered into the provincial (police) armoury,” said Hitschmann.

The testimony is different from the state’s case, which seeks to show that Bennett provided funds to Hitschmann to buy arms for an anti-government plot.