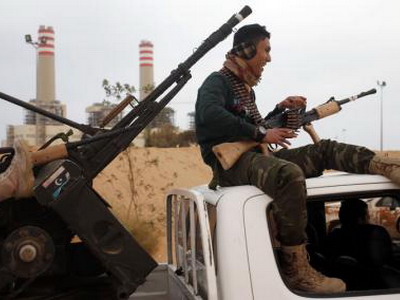 Forces in western Libya are preparing to advance on the city of Sirte, seized by Islamic State last year, their spokesman said, pushing ahead with plans for a counter-attack after the Islamists made territorial gains in the last week.

The fighters based in the city of Misrata would like international logistical support to help retake what has become Islamic State’s most important base outside Syria and Iraq, but will not wait for it before launching the operation, they said.
“We are ready and we are preparing our security arrangements to attack Sirte,” said Brigadier General Mohamed al-Gasri, spokesman for a newly formed military operations room in Misrata.

The operations room was set up by a U.N.-backed unity government that arrived in Tripoli at the end of March.

European powers and the United States hope the unity government will be able to unite Libya’s rival political groups and armed factions to take on Islamic State, though it is unclear how far its authority extends on the ground.

Misrata’s brigades have largely transferred their support to it from a self-declared government formed in Tripoli in 2014.

But the unity government has struggled to win support from another administration based the east and the military forces allied to it. They have also said they would move against Sirte, though past announcements have come to nothing.

Late last month the unity government urged both sides to hold off attacking Sirte before a unified command is created, fearing an uncoordinated offensive could lead to civil war.
“We need logistical support from the international community, and we need weapons and ammunition,” Gasri said. “Whether they’re going to support us or not, we will be there soon. We will not stand and watch.”

Islamic State took advantage of the political turmoil and security vacuum after the uprising that overthrew Muammar Gaddafi five years ago to build a power base in Libya.

The Misrata brigades were present in Sirte as Islamic State began to establish control, but withdrew last summer.

Though it has struggled to win support and hold territory in parts of Libya, Islamic State controls a strip of more than 250 km (155 miles) of Libya’s central coastline, from which it has launched attacks to the east, west and south.

Over the last week it has made gains, carrying out suicide attacks in the sparsely populated area between Sirte and Misrata, including at a major checkpoint at Abu Grain.

Gasri confirmed that Islamic State took several villages in the area and that the line of defence was now at Assdada, about 80 km south of Misrata. The militants have dug trenches and planted mines around the Abu Grain checkpoint, he said.

Thirteen members of the security forces were killed and 110 wounded in last week’s fighting, Gasri said.

Wounded fighters at a hospital in Misrata said suicide bombers had attacked in armoured vehicles, one of which approached a checkpoint behind cars carrying families fleeing Sirte.

Misrata brigade members fought to defend the Abu Grain checkpoint for nearly an hour but were forced to withdraw as they were outnumbered, one said.

The eastern military has made some advances against its armed opponents, including fighters loyal to Islamic State, in Benghazi, Libya’s second city.

A hospital spokesman in Benghazi said two of those killed – including one who was beheaded – were volunteer nurses who had been helping treat wounded troops.