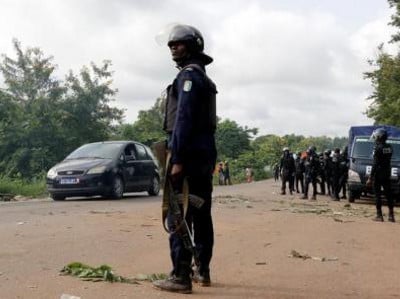 Twenty people escaped custody after assaulting police officers at the courthouse in Ivory Coast’s main city Abidjan, justice official said on Wednesday, the latest in a series of attacks on police in the West African country.

Ten prisoners and another ten people who had been summoned to court escaped on Tuesday and were still at large 24 hours later, a justice official told Reuters. He not say who the escapees were nor why they had been in custody.

A series of military mutinies this year has threatened to derail a fragile peace in Ivory Coast, the world’s leading cocoa producer, which emerged from a decade of turmoil and a 2011 civil war as one of the world’s fastest growing economies.

In the last few weeks unidentified gunmen have staged multiple raids on police stations and security units, stealing weapons and in one case killing an officer.

State prosecutor Christophe Adou said two of the prisoners seized weapons from the police accompanying them as they arrived at the courthouse, allowing all the detainees to escape.
“The prosecutor’s office wants to make clear that this was an escape and not an attack on the court of justice,” he said on national television on Tuesday evening.