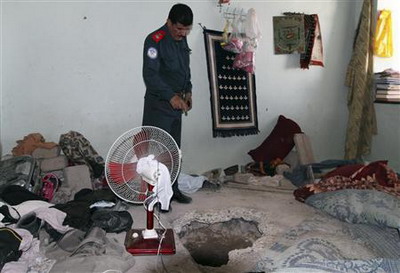 Hundreds of prisoners escaped from a jail in Afghanistan’s south yesterday through a tunnel dug by Taliban insurgents, officials said, a “disaster” for the Afghan government and a setback for foreign forces planning to start a gradual withdrawal within months.

Tooryalai Wesa, governor of volatile southern Kandahar province, told Reuters 488 prisoners escaped due to the negligence of Afghan security forces at the province’s main jail. He said the tunnel led to a nearby house.

The Taliban said in a statement that 541 prisoners escaped through the tunnel, which took months to construct, and were later moved in vehicles to safer locations. The prison, touted as one of the most secure in Afghanistan, is located on the outskirts of Kandahar city.

Afghan President Hamid Karzai’s chief spokesman told a news conference that the incident, in which many Taliban commanders were said to have escaped, exposed serious vulnerabilities in the Afghan government.
“This is a blow, it is something that should not have happened. We are looking into finding out … what exactly happened and what is being done to compensate for the disaster that happened in the prison,” spokesman Waheed Omer said.

General Ghulam Dastgir, the governor in charge of the jail, said the prisoners had all escaped through the tunnel.
“No one managed to escape through the main gate, everybody went out through the tunnel. The insurgents worked on it for some seven months,” Dastgir said.
“The Taliban have planted bombs inside the tunnel and it is hard to investigate until the explosives are removed,” he said.

Kandahar, the birthplace of the Taliban, has been the focus of the U.S.-led military campaign over the past year, with tens of thousands of U.S. and Afghan troops launching offensives around Kandahar city.

In Washington, Pentagon spokesman Colonel David Lapan said it is too early to tell what impact the escape will have on plans to hand over other prisons to Afghan security control.

A U.S. State Department official, speaking on condition of anonymity, indicated that the push to transfer more security responsibilities to Afghan officials will continue.
“This escape is a serious issue which the Afghan authorities are working to address,” the official said, adding that both U.S. and Canadian advisors helped train and mentor Afghan Central Prisons Directorate staff at the prison.

Twenty-six prisoners were recaptured and two killed in a gunfight with security forces, Wesa said.

Lieutenant Colonel Elizabeth Robbins, a Pentagon spokeswoman, said Afghan officials had not officially asked for help in recapturing the prisoners but NATO “personnel who patrol the area are aware of the situation and will assist the Afghan authorities in responding as needed.”

Reporters were taken into the prison after the jailbreak to view the opening of the tunnel in one of the cell blocks.

Reuters photographs showed a hole, several feet deep, cut into the concrete floor of one of the cells. The hole, big enough to allow one man to climb down at a time, appeared to be connected to a tunnel.

A large carpet in the cell looked to have been folded back to expose the hole. Police told reporters the insurgents had used car jacks to break through the concrete floor, which was several centimetres thick.

The Taliban said the prisoners escaped over a four-and-a-half hour period during the night, meaning more than 100 prisoners an hour would have had to crawl out through a tunnel barely large enough to fit one man.
“Mujahideen started digging a 320-metre (1,049 feet) tunnel to the prison from the south side, which was completed after a five-month period, bypassing enemy checkposts and the Kandahar-Kabul main highway leading directly to the political prison,” the Taliban statement said.
“They moved people in several groups. They had a comfortable period of time to move that many people. It’s obviously very worrying with the timing around fighting season,” said a foreign official in Kandahar with knowledge of the incident.

Wesa said of the 488 who had escaped, 13 were ordinary criminals and the rest were insurgents.

Analysts said the escape was a serious setback for security, and there was doubt about whether it could have happened without the help of guards.
“It is either a case of the jailers being financially motivated and being bribed, or a case of them being politically motivated,” said Waheed Mujhda, a Kabul-based analyst and expert on the Taliban.

Justice Ministry spokesman Farid Ahmad Najibi said he could not rule out the possibility guards had helped in the escape.

Whether the insurgents had all escaped through the tunnel or not, the freeing of hundreds of prisoners, including Taliban militants, is embarrassing for the Afghan government and foreign troops who have trumpeted recent security gains in and around Kandahar after months of heavy fighting, Mujhda said.

The brazen jailbreak comes months before the start of a transfer of security responsibilities from foreign to Afghan forces in several areas — including the main city in neighbouring Helmand province — as part of the eventual withdrawal of foreign troops from the country.

Under the transition program, Afghan forces would begin taking over from foreign troops in seven areas this summer and should have control of the whole country by the end of 2014.

While Kandahar is not among the areas listed for the transition of forces in the first stage, yesterday’s jailbreak raises serious questions about the readiness of Afghan forces to take over from foreign troops.

The jailbreak also drew comparisons to a similar incident three years earlier. In 2008, Taliban insurgents blew open the gate of the Kandahar prison at night, allowing up to 1,000 inmates, including hundreds of Taliban insurgents, to escape.

Days after that escape, hundreds of Taliban fighters seized villages in districts close to Kandahar and appeared to threaten the city itself, with the government sending more than 1,000 extra troops from the north as reinforcements. Nearly 100 Taliban fighters were killed in the ensuing battle.