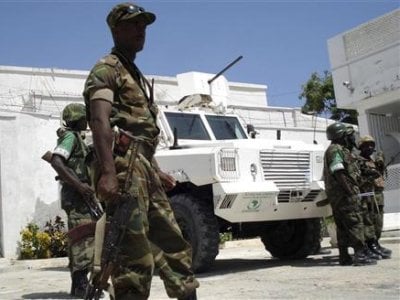 One Ethiopian peacekeeper was killed and two others wounded when a U.N. convoy was caught up in a tribal clash in the Abyei border region claimed by both Sudan and South Sudan, the United Nations said.

A tribal leader was shot dead in the same incident, while in separate violence along the neighbors’ volatile border, the Sudanese army clashed with rebels of the SPLM-North, which is trying to topple President Omar Hassan al-Bashir.

Sudan and South Sudan in March agreed to resume cross-border oil flows and defuse tensions which have plagued them since the South seceded in 2011 after an independence vote, Reuters reports.

Kuwal Deng Mayok, the top Dinka leader in Abyei, was travelling with a U.N. convoy when he was killed by members of the Misseriya in a clash on Saturday that risked fuelling new tensions in the flashpoint area.

An Ethiopian peacekeeper was also killed and two others were seriously wounded by a Misseriya tribesman, U.N. Secretary-General Ban Ki-moon’s office said.
“The Secretary-General urges the governments of Sudan and South Sudan and the … Dinka and Misseriya communities to remain calm and avoid any escalation of this unfortunate event,” it said in a statement.

The Sudanese foreign ministry said in a statement it would carry out an “urgent, transparent, thorough and fair” investigation. It urged all parties to exercise restraint.

Abyei straddles the border between the neighbors, who fought one of Africa’s longest civil wars. It is prized for its fertile land and small oil reserves.

Like South Sudan, Abyei was meant to have an independence vote, agreed under the 2005 peace deal which ended the civil war between the north and south. But both countries have been unable to agree which tribal members should participate.

Ethiopian peacekeepers have been running a temporary administration for Abyei since Sudan seized it in May 2011 following an attack on a convoy of U.N. peacekeepers and Sudanese soldiers which the United Nations blamed on southern forces. Khartoum later withdrew its forces under a U.N. peace plan.

In separate fighting, the army clashed on Sunday with rebels of the Sudan People’s Liberation Movement-North (SPLM-North) in the Sudanese state of South Kordofan, bordering South Sudan.

Army spokesman al-Sawarmi Khalid told state news agency SUNA his troops had repulsed a rebel attack in the area of Um Burmbita, killing many fighters of the SPLM-North.