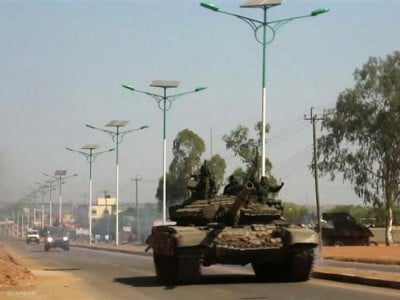 Africa’s youngest nation was devastated by a war that broke out in December 2013 when President Salva Kiir sacked his vice president, Riek Machar.
“I heard a sound of gunshots and people were running everywhere,” Juba resident Ramdan Kazimiro told Reuters.

Another resident who did not want to reveal his name told Reuters gunfire was heard in Gudele, a suburb in Juba’s west, where Machar also has a residence.
“The military put their cars in the middle of the road coming from Gudele…the whole area is (in) lock down by the government military,” he said.

A Reuters witness said there was apprehension in Juba, with terrified people hurrying to their homes, fearful major violence could break out again.

Earlier Thursday there was also shooting in Wau, a flashpoint town in South Sudan’s northwest which forced at least 200 civilians to flee to a United Nations compound in the area for safety.

Shantal Persaud, spokeswoman for the United Nations Mission in South Sudan (UNMISS), told Reuters gunfire broke out south of the mission’s compound in the town of Wau at around 9am.

The capital of South Sudan’s Bahr el Ghazal state, Wau has been the scene of renewed fighting between government forces and armed groups in recent days that has forced thousands to flee.

Shooting continued on Thursday until around 10am, Persaud said. “After the shooting started, some 200-250 civilians arrived at …the UNMISS Wau base,” she told Reuters.

She said it was unclear what sparked the fighting or which groups were involved.

South Sudan’s economy has been struggling because oil production, on which the government nearly wholly depends for its revenues, plummeted during the conflict.

Any renewed instability is likely to disrupt the fragile recovery process and keep the vast majority of its 11 million people mired in poverty.

Machar back in Juba