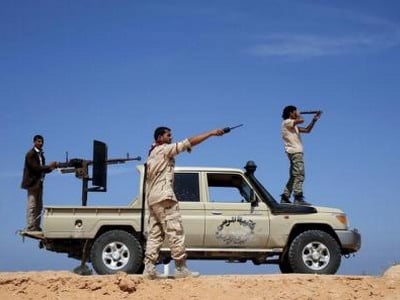 An armed group allied to the Libya Dawn forces controlling Tripoli has detained 170 Tunisians in the Libyan capital since Saturday after Tunis arrested one of its commanders, Tunisian officials said on Monday.

Brahim Rezgui, Tunisian consul in Tripoli, told a Tunis radio station the group demanded the immediate release of the Libya Dawn commander, whom he did not name. Libyan officials in Tripoli did not immediately respond to requests for comment.

Armed groups in Libya, which is split between two rival governments and competing militias, have in the past kidnapped or detained foreign nationals – including diplomats – to pressure governments to release Libyans arrested abroad.

Libya Dawn, a loose alliance of former rebel brigades and Islamist-leaning groups, seized power in Tripoli last summer. Most countries closed their embassies during the fighting and maintained official recognition for the rival government now based in eastern Libya.
“An armed group belonging to Libya Dawn detained 170 Tunisians since Saturday after a leading figure in this group was arrested in Tunisia last week,” a Tunisian foreign ministry official told TAP state news agency.

Relations between the North African neighbours have become increasingly tense, with Tunisia’s government worried about spillover from the chaos that continues to plague Libya four years after strongman Muammar Gaddafi was overthrown.

Erdogan’s Outburst and the Future of the Turkish State