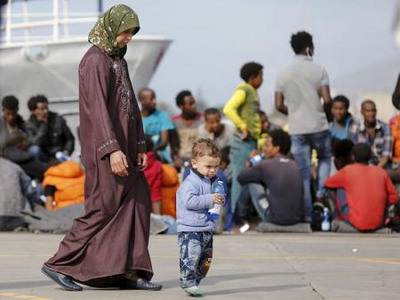 Hundreds of Syrians and other migrants thronged a small park in central Istanbul on Wednesday, hoping for a last chance to reach Europe before poor weather makes their favoured route from Turkey to Greece too dangerous to undertake.

“It is time to go, while the door to Europe is open,” said Zopir (20) who fled the Syrian town of Deir al-Zor three years ago and now wants to reach Europe before his wife, eight months pregnant, gives birth. “I am afraid, but I am ready.”

Zopir scraped together 8,000 euros for the trip, which begins in and near the park in Aksaray, a working-class district of Istanbul, by hiring a “dealer”: a front man for smugglers who help refugees reach the Aegean coast.

Zopir and his wife are part of this year’s record wave of more than 300,000 people fleeing war, persecution and poverty for Europe and using Greece as a springboard. That marks a fivefold rise since 2014 and their numbers continue to grow, the International Organisation of Migration (IOM) says.

Now crossing is becoming treacherous and will soon be altogether impassable as autumn descends and winds pick up and churn the Aegean Sea, placid during the summer months.
“This is the last week. After this, the waves become too big,” said Joseph, a 37-year-old Palestinian who has worked as a dealer for four years. He declined to give his surname. ‘

Less scrupulous dealers may organise trips after the weather turns, he said. Migrants from Syria, Iraq, Afghanistan and Africa find Joseph, who runs a team of seven men, through word of mouth. Others are listed on Facebook pages run by refugees.

Joseph finds them a consignee, who, for a small fee, holds their money and pays smugglers once they get a call with a password from Europe. They are then passed to the next middleman, who bundles them into vans leaving for the coast.

It is a lucrative trade. Joseph says he works three months of the year, taking a $100 cut of the $800 each of his 100 or so customers a week pay to jam themselves into a rubber boat or small dinghy to reach the Greek islands.
‘LAST BID’

More than 70 people drowned trying to reach Greece only in the first half of this month – almost half of the deaths so far in 2015, making September the deadliest month in two years, the IOM said.
“The sudden increase in deaths is because more people are making a last bid while the weather is still good and the water is warm,” said Emrah Guler, an IOM project officer in Turkey.

Rumours that Turkey is tightening border security and the sorrow prompted by photographs of three-year-old Aylan Kurdi’s body washed up on a Turkish beach are doing little to deter the flow.

Zopir said seeing Aylan’s image prompted him to leave now, before the birth of his own child.
“I do not want to do this with a baby,” he said at a cafe where migrants share a water pipe or sip strong coffee.

Aksaray, a collection of concrete apartment blocks where rooms and haircuts are advertised in Arabic, has become a hub for Syrians to meet dealers, whom they call “the mafia”.

Social media helps keep dealers and money handlers honest, said Muhammed Salih Ali, head of the Association for Solidarity With Syrian Refugees in Izmir, a key city on Turkey’s Aegean coast on the route to Greece.
“Millions of dollars turn over every night and there is no official trace. People behave honestly because if money were to disappear, it would make waves on Facebook,” he said. “If this many people are going from here, it’s because the system works.”

A new retail sector has sprung up, reminding migrants of the risks ahead: shoddily made life vests, inner tubes from old tires, balloons to keep money and phones dry are all for sale.

Fears of shipwreck propelled thousands to head for the land border with Greece by bus this week, or when they could not find tickets, by foot from Istanbul. The move was organised on Facebook to draw attention to their plight.

Bulgarian border police said they had prevented around 200 people reaching their border with Turkey early on Wednesday.

Germany and other European Union states’ raising of refugee quotas may have the unintended consequence of encouraging more desperate attempts to reach Europe, said Metin Corabatir, who heads the Research Centre on Asylum and Migration in Turkey.
“With hopes for peace in Syria dead and buried more people are crowding Europe’s door,” he said.

August was one of the bloodiest months in the Syrian civil war, now in its fifth year. This helped lift the number of registered refugees by more than 73,000, according to the UN refugee agency UNHCR.

For some, however, the path to “paradise” looks just too perilous right now.

Maisa, a 32-year-old former banker, fled Syria a year into the war and has sheltered in Turkey since 2013. Without a work permit or insurance, she struggles to make ends meet, spending hours traversing Istanbul by bus to give music lessons.
“I feel like they are telling me, ‘Go, why do you stay?'”

Last year, she was unable to raise the $4,000 for an eight-day voyage to Italy. This year she scrapped plans to make the quick trip to Greece, rattled by news of toddler Aylan’s death.
“It will be winter and the waves will be too high and too dangerous, so I cannot go. I would die and nobody would know about me. I am just a number.”

She pauses, and then says: “But I will go next year, definitely. I am not staying anymore.”