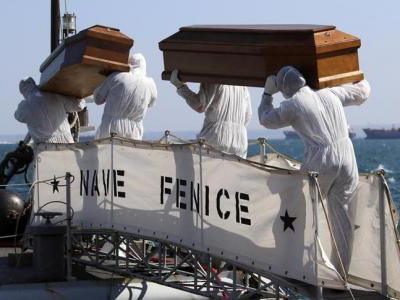 Italy arrested three Egyptian men who are suspected to have piloted a boat carrying more than 300 migrants to Italy from Egypt, including a 10-year-old Syrian girl whose father said she died during the sea crossing, according to Italian media.

A Syrian man who was brought to Sicily on Wednesday after being rescued told an Italian prosecutor in that his daughter had fallen into a diabetic coma during the voyage and died.

Italian media said Egyptian people smugglers, to whom he had paid several thousand dollars for the trip, took a small backpack containing his daughter’s insulin and threw it into the sea just as the boat was pulling out of port.

Without the medicine the girl did not survive the long trip and, at the urging of the other passengers on the crowded boat, her father buried her at sea, Italian media reported citing the prosecutor in Syracuse who took his testimony.

Police said they arrested the three men for people trafficking, not homicide, since the girl’s father had said the men arrested were not the men who threw away the girl’s medicine, Italian media reported on Saturday.

Italy is one of the main entry points, along with Greece, for migrants and refugees seeking to enter Europe from North Africa and the government estimates as many as 200,000 may come this year.

Tensions have risen in recent days with Italians increasingly protesting the opening of new shelters near their homes. Italy is housing more than 84,000 migrants in shelters across the country, the Interior Ministry says.