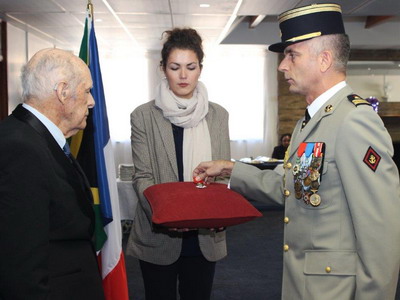 The French Defence Attache has awarded World War II veteran John Patrick Swale the Knighthood in the National Order of the Legion of Honour.

Colonel Olivier Ducret, the Defence Attaché at the Embassy of France in Pretoria, bestowed the insignia of Chevalier de l’Ordre National de la Légion d’Honneur upon Swale during a ceremony in Pietermaritzburg on 5 June.

The French Legion of Honour celebrates the accomplishments of distinguished individuals, irrespective of sex, social background and nationality.

The national order of the Legion of Honour was established by Napoleon Bonaparte in 1802. It is the highest decoration in France and is divided into five degrees of increasing distinction: Chevalier (Knight), Officier (Officer), Commandeur (Commander), Grand Officier (Grand Officer) and Grand Croix (Grand Cross). It was first awarded on July 14 1804.

John Patrick Swale was born on 12 July 1923 in Chiddingly, Sussex in England and joined the Royal Air Force (RAF) in May 1942. He joined the 75 NZ Squadron in June 1944 where he served the Royal Air Force until September 1944. During World War II, he took part in air operations in North-West Europe as a rear gunner on bombing missions. On board of the Lancaster bomber he flew on 30 operational bombing missions against targets in Germany and France, near Le Havre and Calais.

In February the Ambassador of France to South Africa, Christophe Farnaud, bestowed the signet of Chevalier de l’Ordre de la Legion on World War II veteran Albert Richard Gotze. The French government has been awarding the Légion d’honneur, the highest French order for military and civil merits, to D-Day veterans from many different countries since deciding on the 70th anniversary of D-Day in June 2014 to honour foreign veterans and thank those who fought and risked their lives to secure France’s liberation during the Second World War.

Götze, 95 years old, was born in Prieska in January 1923 and participated as a member of the British Royal Air Force No 127 Spitfire squadron. While operating as part of the UK defence unit, Götze flew cover over the various beaches of Normandy, France on D-Day, 6 June 1944 as part of the Allied invasion of Normandy in Operation Overlord during World War II.