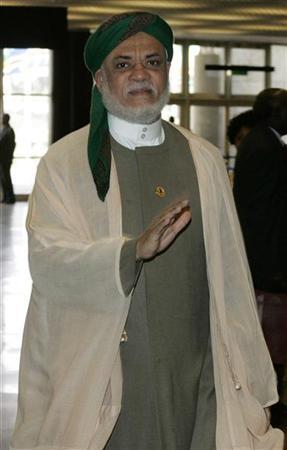 Comorans voted to extend President Ahmed Abdallah Sambi’s mandate, official figures show today, but the opposition said the low turnout is an indictment of his leadership.
Provisional results from the National Electoral Commission gave the ‘yes’ vote 92.32 percent, with a 44.81 percent turnout, Reuters adds.
As well as extending Sambi’s mandate by a year, voters also agreed that the presidents of the Comoros’ three islands — Grand Comores, Anjouan and Moheli — would be replaced by governors.
“I am very satisfied with these results even if I note the weak turnout. I congratulate the civic spirit shown by the population,” Foreign Minister Ahmed Ben Said Jaffar told Reuters.
The Comoros’ convoluted political system was designed to keep the three coup-prone Indian Ocean islands in a union following the archipelago’s volatile post-independence history.
Rivals of Sambi — who had been due to step down in May 2010 — accuse him of clinging to power and weakening each island’s autonomy. The government says the current system is too costly.
The provisional results will now be presented to the Constitutional Court for official approval.
Sambi will now stay in power until 2011 before handing over to a leader from Moheli under the rotating system. The opposition had urged supporters to boycott the poll and accused the authorities of inflating the official turnout.
“Participation was below 10 percent across the polling stations (on the three islands),” senior opposition figure Houmed Msaidie told Reuters, adding that the turnout was a vote of no-confidence in Sambi’s administration.
“Sambi took risks in organising this referendum which the opposition opposed, now he must respect the results.”
Sambi’s supporters in the capital Moroni had partied late into last night in anticipation of victory, driving convoys through the city’s ramshackle streets and honking car horns.
His critics fear the constitutional changes threaten the autonomy of the three islands — which lie between Madagascar and Mozambique — and say the referendum to extend his leadership by a year is groundwork for an even longer extension.
The opposition had argued that the vote would be illegal, in any case, because voter lists were incomplete and not every eligible voter had been issued with the right card.
“I didn’t vote because I considered this vote anti-constitutional,” said local teacher Ali Mougni.
“Voter lists have not been revised and the proposed law seeks to reduce further the minimum autonomy bestowed on each island which was fundamental to the process of national reconciliation,” he said.
There have been more than 20 coups or attempted coups in the nation of 860,000 people since independence from France in 1975. Fears that a ‘yes’ vote in the referendum would trigger a return to civil unrest have so been unfounded.
Last year’s removal of one island’s rebel leader in an African Union-led military intervention hurt tourism revenues and foreign investment. The global economic downturn has also depressed prices of vanilla, the nation’s main export commodity.
Voters on Mayotte, the fourth island in the group, in March chose by referendum to become a fully fledged part of France.
Authorities said 95.2 percent of those who voted opted to turn Mayotte into a “departement”, strengthening ties with Paris and requiring the island to align itself with French law. Only 4.8 percent voted no. Participation was 61 percent.
Mayotte voted against independence in referendums in 1974 and 1976.