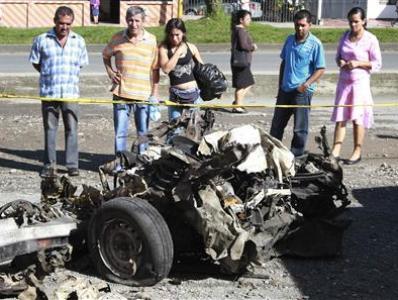 A car bomb wounded 17 people in Colombia’s colonial-era city of Popayan, but a “calamity” was averted when police intercepted the vehicle before it reached its target in the main square, said authorities.

Acting on a tip, police stopped the car late Saturday night in an outlying neighbourhood before it reached its intended destination, where soccer fans were celebrating a victory.

When officers suspected an explosive device was inside, they hauled out the driver and warned passers-by to leave the area before it exploded, police said.

The car was packed with 70 kg of explosives and went off seven minutes after the auto was intercepted, Reuters reports.
“Dozens of people would have been killed … it would have been a calamity,” a police officer in Cauca said of the potential casualties if the bomb had gone off as planned.

The blast injured 17 people, two seriously, according to the presidential administration in Bogota. Thirty-five homes and 12 motor vehicles were damaged and the explosion knocked out power in parts of Popayan, a city of about 300,000 people.

A Reuters photographer said the blast ripped off roofs and knocked down walls in several nearby homes. Police said windows were also blown out of buses in the area.

The driver of the car, who was arrested, told police he belonged to the National Liberation Army (ELN), according to police commander Orlando Pineda, who said the bomb could have been in retaliation for anti-narcotics operations.

The ELN is Colombia’s second-biggest guerrilla group behind the larger Revolutionary Armed Forces of Colombia (FARC.)

Police say both groups seek to benefit from the cocaine trade in Cauca, a region of mountains and jungles dotted with coca farms and refining centers, and the area has long been a focus of U.S.-backed anti-drug sweeps.

The Popayan blast is the first car bomb set off in a major Colombian city since August 12, when an explosion in a vehicle wounded eight people in Bogota outside the offices of a leading broadcast network.

That attack was widely seen as a FARC rebel challenge to President Juan Manuel Santos, who took office five days earlier. A former defence minister, Santos vowed to continue the U.S.-backed campaign against the FARC and other leftist guerrillas.