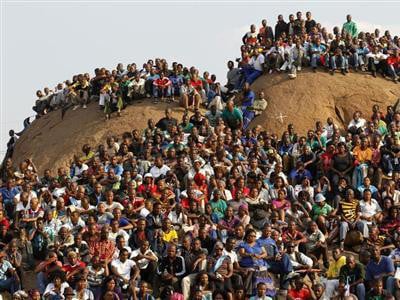 Wage talks across South Africa’s mining sector starting in May will be among the toughest ever with strikes a certainty given inflation, worker militancy and shrinking company margins.

There is also real risk of a repeat of the labor violence and wildcat action that led to over 50 deaths last year, costing companies and the state billions of dollars in lost revenue.

Emboldened by the high settlements some received after the illegal 2012 strikes, labor militancy has spread from platinum to gold and coal. Some miners have downed tools even before talks start.

Their income is being devoured by rising prices but wages account for over 50 percent of company costs and they have paid above-inflation wage rises in recent years.
“The gold companies cannot afford anything above inflation,” said David Davis, mining investment analyst at SBG Securities.
“Just escalate $1,150 by 12 percent per year and by 2015 the gold price will have to be around $2,000 an ounce for the producers to make a 20 percent margin,” he said. Spot gold is currently at 2-year lows around $1,425 an ounce.

He said broadly, the all-in cash costs in South Africa for AngloGold Ashanti, Africa’s top bullion producer, and smaller rivals Gold Fields and Harmony Gold were about $1,150 an ounce in 2012 and have been rising by 12 to 14 percent per annum over the last three years.

In the platinum sector, the situation is more dire, with about half of the shafts unprofitable at current prices.

There is limited upside for the price of metal used to make catalytic converters that cap emissions from automobiles. Supply concerns from South Africa, home to 80 percent of platinum reserves, could provide a boost but producers can hardly cash in on that if their mines are shut.

AMCU won in platinum and now claims 105,000 members or a fifth of South Africa’s mineworkers. Wage talks in South Africa’s gold, coal and platinum sectors take place every two years, but this will be the first with AMCU in such a strong position.

Wage talks are always tough and the last official round two years ago triggered limited strikes including a shut down of most of the country’s gold mines for four days.

But last year’s wave of illegal strikes, that closed mines for weeks at a time, have been a game changer.

Workers are relying on the unions to deliver deals such as the 11-to-22 percent pay hike platinum producer Lonmin’s gave to illegal strikers after 34 of them were shot dead by police at its Marikana mine.
“We are extremely concerned about the abnormal environment where people can raise unrealistic expectations,” said NUM General Secretary Frans Baleni.

Militancy is spreading. Diversified miner Exxaro had an illegal strike in March at five of its coal operations.

Exxaro chief executive Sipho Nkosi told the Reuters Africa Investment Summit last week the strikers had demanded a bonus even though they had not met their agreed targets.
“They said you made enough money, you declared a profit in your results. You made over 2 billion rand so you can afford it. So every employee must get 15,000 rand ($1,700),” he said.

But talk of shrinking profit margins can seem irrelevant if you work in dangerous conditions two kms (1.2 miles) or more underground for 4,000 rand ($440) a month with a family to feed.

The low wages and inequality that the mining sector was built on, and the demographic profile of your typical mineworker – rural background, male, with an average of eight dependents – mean that even above inflation wage increases have not gone far. Inflation reached almost 6 percent in February with food prices rising 6.1 percent.

This helps explain why the more radical AMCU has poached tens of thousands of former NUM members.
“Many of our workers are getting 5,000 rand a month and on this amount you must pay for food, accommodation, transport and your family,” said Siphamandla Malchanya, an AMCU activist at Amplats’ operations in the platinum-belt city of Rustenburg.
“But petrol prices and everything is going up each month so we won’t even accept 10 percent this year.”

Adding fuel to the fire, the world’s top platinum producer Anglo American Platinum (Amplats) is in talks with the government and unions over its plans to mothball two Rustenburg mines and cut up to 14,000 jobs in a bid to restore profits.

Much of South Africa’s mining labor force is semi-literate and from rural areas, and so laid-off workers would have few other options and their plight will stoke already volatile social tensions at a time when wage talks need to take place.

Just getting them off the ground may not be easy. Impala Platinum says AMCU is now the majority union at its operations, representing over 50 percent of its workers, while Amplats says it claims 40 percent of its employees.

But neither company has been able to sign a “recognition agreement” with AMCU yet, needed to get talks rolling.

Another problem is structural. In platinum, negotiations are done company by company, while in gold and coal they take place collectively under the chamber of mines.

This is a key reason for AMCU’s penetration into platinum, as it is easier to convince workers you can hammer out a new deal for them if they are not part of an industry-wide process.

The chamber on Monday is meeting with AMCU to see if it is willing to embrace industry-wide wage agreements in the platinum sector but the union has signaled it is not interested.
“Our members are not in favor,” said AMCU national treasurer Jimmy Gama on Friday.