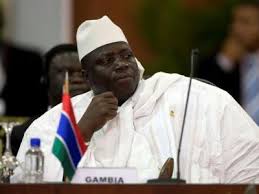 When Gambian intelligence officers arrested journalist Ebrima Manneh at his newspaper, he asked an office guard to save some tea.

“I’m coming right back,” he said, according to colleague Alhagie Jobe, who was present in the newsroom. That was on the afternoon of July 11, 2006; since then, neither his colleagues at the Daily Observer nor his family have seen him again.

Rights groups say Manneh is one of dozens of Gambians who disappeared without trace during the 22-year rule of president Yahya Jammeh, which ended last month when he fled the country.

Relatives have tried in vain for a decade to find the journalist, nicknamed “Chief” although he held no traditional title. Now they believe he is dead and, like a growing number of Gambians, say they are seeking justice.
“I want the new government to take action and prosecute whosoever had a hand in my brother’s disappearance,” said his sister Adama Manneh, a police officer, wearing a T-shirt bearing her brother’s face that read: “Where is Chief Manneh?” Ebrima’s brother Lamin said he hoped at least to recover the body.

Some families hope to gather evidence for a case against Jammeh – who quit under international pressure after losing an election in December – for human rights abuses, including unlawful detention, torture and murder of perceived opponents, charges his supporters deny.

Attempts by Reuters to reach Jammeh for comment in Equatorial Guinea, where he fled, were unsuccessful.

Rights officials say building a case could be tough. Another African ex-leader, former Chadian president Hissene Habre, was jailed for life last year for crimes against humanity, more than a quarter century after his overthrow. Habre was convicted by a court in Senegal with the help of incriminating documents, but rights officials say any hard evidence against Jammeh is lacking so far.

Another complication is that Equatorial Guinea has no extradition treaty with Gambia.

Many Gambians dream of bringing Jammeh before the International Criminal Court, which has put former Ivory Coast president Laurent Gbagbo on trial.

While Jammeh fled before fulfilling a pledge to withdraw Gambia from the ICC, Equatorial Guinea has never been a member of the Hague-based court and would be unlikely to hand him over.

Still, police in Gambia have promised to investigate cases of at least 30 people so far reported as missing or killed since Jammeh seized power in 1994, among them journalists, businessmen and soldiers. Several senior officials have been arrested including the former prison boss, interior minister and spy chief who was charged with murder last week.

Gambia’s new President Adama Barrow has promised a U.N.-backed truth and reconciliation commission into past crimes which also include alleged torture.

CHRONICLE OF THE DISAPPEARED

Manneh was 28 when the intelligence officers came to call at the Daily Observer’s offices in the capital, Banjul. On various occasions, Jammeh and his officials told reporters he was dead, had fled the country and had “stage-managed” his disappearance, according to an annual human rights report published in 2012 by the U.S. State Department.

The family still do not know the reason for his arrest, though colleagues suspect it may have been related to comments he wrote about the former president.

Adding to the mystery, Manneh called his mother immediately after his arrest, asking her to fetch his bag from the office. Manneh had said he was planning a trip abroad and would not be able to get it himself, his mother Sulay Ceesay told Reuters.

Three days later, on July 14, Manneh’s sister discovered his passport in the bag. “I said to myself: ‘Chief did not travel, he is in town’,” said Adama.

The search began but family members were unable to find out where he was taken after the local police station. Two witnesses said they spotted him on separate occasions in hospital in 2007 looking sickly, but Adama said officials prevented her from visiting him at the time.

When Adama made inquiries within the police force, her superiors warned that she too risked arrest.

In 2007, the Media Foundation for West Africa, an NGO, brought a legal action against the Gambian government at the Community Court of Justice, a body set up by the ECOWAS group of West African states. The government lodged no defence and failed to show up for the case.

The Nigerian-based regional court ruled in 2008 that Gambia had violated Manneh’s human rights. It ordered the government to free him and pay the family $100,000. The compensation was never handed over, the family said.

The court heard Manneh had been shuttled between at least six different detention sites between 2006 and 2008, and was never charged or given access to a lawyer. One witness, a journalist from a different newspaper, told the court he had seen Manneh being led back to a police cell in December, 2006.

Edward Gomez, who was justice minister and attorney general in 2010-2012 and later acted as Jammeh’s lawyer, expressed ignorance of the journalist’s fate. “I know what happened is very painful but quite frankly I don’t know what happened to him,” Gomez told Reuters.

Every year Adama went to Banjul’s main prison to attend the annual release of pardoned prisoners to see if her brother was among them. Hope finally deserted her only in the past month when the new president released more than 100 political prisoners from some of the country’s many detention centres. Manneh was not among them.
“I was thinking that my brother would be released but he never showed up there and I knew he had been killed,” Adama said in the courtyard of her home near Banjul with her mother and sister, their cheeks glistening with tears.