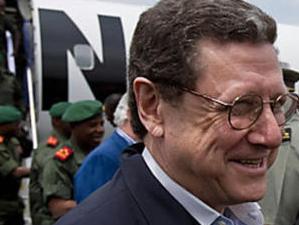 The top United Nations official in the Democratic Republic of the Congo (DRC) has been visiting the war-torn east of the vast country for talks on reinforcing the protection of civilians within the context of a new anti-rebel operation launched by the national army with UN support.

Alan Doss met with the governor of North Kivu province, scene of some of the most fierce recent fighting, military and civilian officials of the UN peacekeeping mission in the country, know as MONUC, UN humanitarian agencies and non-governmental organizations (NGOs) on the progress of the new operation, called Amani Leo, launched earlier this month.

It replaces Operation Kimia II, supported by the UN with helicopter lifts, medical evacuation, fuel, rations and firepower to keep rebels in North and South Kivu provinces from reclaiming areas previously under its control, during which Congolese soldiers are alleged to have committed massacres and gang-rapes.

In December, Ban said MONUC had suspended logistical and other support for national army units when there were sufficient grounds to believe their operations would violate human rights.
“The protection of civilians and the means to reinforce this, particularly within the context of operation Amani Leo were at the heart of Doss’s talks with officials in Goma [North Kivu’s capital],” MONUC said in a news release.
“Steps have been take to ensure that, within the execution of this operation, the aspects linked to this protection are in full conformity with the terms of Resolution 1906,” it added, referring to the Security Council resolution of 23 December last year, which called on UN peacekeepers to “use all necessary means” to protect civilians from threats from any party.

The main target of both operations has been the mainly Rwandan Hutu rebel group known as FDLR, and a MONUC news release earlier this month said Amani Leo’s “principal objectives are to protect civilian populations, clear strategic areas of negative forces, hold territory liberated from FDLR control, and assist in restoring State authority in these zones.”

Doss visited former FDLR fighters who have recently emerged from the forests and laid down their arms under a MONUC programme for demobilization, repatriation and reintegration. They told him many of their fellow rebels want to join them but it is becoming increasingly difficult for them to desert because of the reinforced surveillance by their commanders.

Doss assured them that MONUC would spare no effort in facilitating the demobilization of FDLR fighters and their dependents with Mani Leo’s multidimensional framework. So far 1500 former fighters and 2000 dependents have been repatriated.

Since its inception 10 years MONUC, with a current strength of some 22 000 military and police personnel, has seen a return to relative stability in much of the vast country, culminating in the first democratic elections in more than 40 years. But fierce fighting has persisted in the east, particularly in North and South Kivu, where Hutu militants blamed for the Rwandan genocide of 1994 have fled, compounding hostilities in a region already beset by ethnic tensions.

Children of the gun