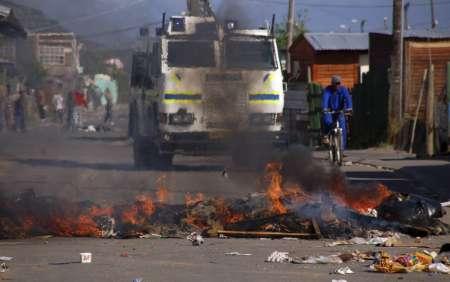 Local government needs a revamp, President Jacob Zuma has told a meeting of some 283 mayors in Cape Town.

Local government needs a revamp, President Jacob Zuma has told a meeting of some 283 mayors in Cape Town.

Zuma was speaking at a meeting called for him to address the country’s mayors as well as provincial premiers on improving service delivery at municipal level in the face of escalating violence by disaffected communities.

“The municipalities are the first door that our people knock on when they need assistance from government,” Zuma said.

Knocking on the door

“As our nation has witnessed recently, the knocking on municipal doors by citizens is not always pleasant. Sometimes it destroys the very public resources and institutions that are critical for solving the problems that they complain about,” the president added.

Zuma’s speech follows violent protests last week at Standerton in Mpumalanga, at Katlehong on Gauteng’s East Rand and in Diepsloot, north of Johannesburg.

This, in turn, came after an earlier round of destructive demonstrations in July, just two months after Zuma was inaugurated as head of state with a mandate to deliver on 15 years of promises to create employment and fight poverty.

Service protests have escalated in recent years. As Zuma was speaking, a rampaging mob was burning Somali-owned shops in Barkly-West near Kimberley in the Northern Cape.

Zuma told the mayors some of the protests “have tended to become violent, criminal and destructive. They have at times been directed at our brothers and sisters from other countries in the African continent,” he said of xenophobic mob violence that last year alone left 62 people dead.

“…I wish to take this opportunity to state without any ambiguity: this government will NOT tolerate the destruction of property, the violence and the intimidation that often accompanies protests.
“There is no cause in a democratic and free society, however legitimate, that justifies the wanton destruction of property and violence that we have witnessed,” Zuma said.

“…burning down libraries, torching people’s houses, and looting spaza shops do not build a strong nation. It does not solve our legitimate problems.”

Zuma conceded that there “are some challenges that we need to look into urgently” in order to address public anger.

But fixing the problem won’t be easy, Zuma continued, saying he was mindful “that we are discussing service delivery against a background of a global economic crisis, which means we really do not have the type of resources we need to fulfill our goals.”

He added that many “municipalities are bankrupt, many people are unemployed and cannot pay for services which means revenue collection is stagnant and the tax base has shrunk.”

Power struggles also added to the “deep crisis of governance” many municipalities faced, he said.

“These battles for control over resources render the affected municipalities effective dysfunctional.

The gap between the governors and the governed widens, you then get the alienation and frustration that is often reflected in the destructive protests we have all witnessed.
“Thirdly, we must seriously discuss how we can strengthen basic administrative systems which are absent in some municipalities. We need the capacity to collect revenues that are critical for providing basic services. There is weak financial management, which often results to irregular expenditure, corruption, and adverse audit outcomes by the Auditor-General,” Zuma said.

Zuma says it is for this reason the state must rethink the role that other spheres of government play in the local government sphere. “Experience shows us that the role of provincial and national spheres has not always been useful and productive.”

“There is also another fundamental question we have to ask: can every municipality be expected to perform the same set of functions? Put differently, can municipalities with vastly different capacities be expected to perform the same functions?
“Answering this question is important because it may well be the case that we have entrusted some responsibilities to certain municipalities which they can never be able to fulfill.
“It is equally possible that some municipalities, especially metros, can perform more functions than we have given them.
“All I am suggesting is that we may have imposed a one-size-fits-all arrangement when a differentiated approach is called for, Zuma said.

“It is also clear to me that fundamental changes are needed to reform governance in municipalities. Some of these changes should include, I would like to suggest, separating the executive functions from the administrative ones.

“In some municipalities councilors tend to interfere in administrative management and operations of municipalities. They want to be mayor and municipal manager at the same time.
“We also have to strengthen oversight in municipalities. The fusion of executive and legislative mandates creates problems.”

“… we must also begin an intensive dialogue with the people who have given us the mandate to rule over them. Perhaps we can discuss here how that dialogue can take place, to bridge the gap and close the social distance with the governed,” Zuma added.