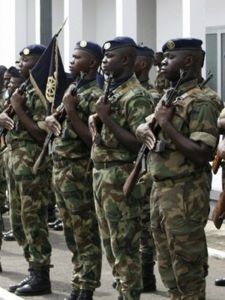 Troops opened fire on protesters in the west of the Ivory Coast yesterday, killing two, as Burkina Faso’s president met Ivorian leaders to try to resolve a deepening crisis.

Protestors also marched through cities across Ivory Coast, the world’s biggest cocoa exporter, before being dispersed by police.

In Daloa, a cocoa-producing centre, protestors burned tyres and hurled stones at security forces who then fired on them, witnesses said. A sergeant told Reuters two people were killed and 15 wounded in the shooting.

Protests have erupted almost daily since President Laurent Gbagbo dissolved the government and the electoral commission on February 12. The military killed at least five protesters at a rally last Friday.

The opposition has called for mass action to continue until Gbagbo reinstates the electoral commission.

Public anger is mounting over years of delays to the election timetable but cocoa output has remained largely unaffected, according to exporters.
“Solution”

After meetings between Gbagbo, Burkina Faso’s President Blaise Compoare and opposition groups in the main city of Abidjan, Ivorian Prime Minister Guillaume Soro said a breakthrough had been made. He was vague on the details.
“Our discussions have reached a solution. The political actors agree with each other and we can advance the process of exiting the crisis and bring peace to our country,” he said.

Soro, a rebel during the 2002-3 civil war before he became prime minister under a 2007 peace accord, said he would be ready to announce a new government tomorrow.

Reforming the electoral commission could take much longer.

Gbagbo dissolved the commission after accusing its chief Robert Mambe of illegally adding names to the electoral register to boost the opposition vote.

Ivory Coast is now certain to miss a March deadline to hold presidential polls already four and a half years overdue.

The polls are meant to draw a line under a war that cut the nation in two and brought economic growth to a near standstill.
“We’ve been lied to all along,” shouted Amoin Tamini at the Toumodi march. “We can’t sit with our arms folded. We are on the streets to get elections and liberate Ivory Coast.”

In Abidjan’s northern suburb of Abobo, a Reuters witness saw police disperse marchers, at least one of whom was wielding a machete, which officers confiscated.

A group of protesters briefly captured a plainclothes policeman and seized his gun before police broke them up. One protester, badly beaten by police, lay unconscious.

Pressure from the United Nations, the United States, former colonial power France, the Economic Community of West African States (ECOWAS) and Compaore is mounting on Gbagbo to move swiftly to get the peace process back on track.