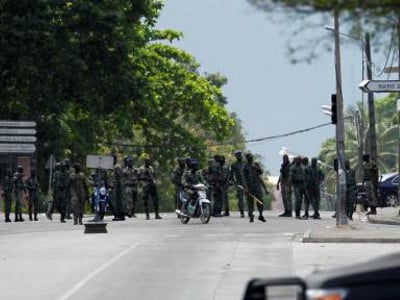 At least five people were wounded by gunfire during protests in Ivory Coast’s second-biggest city, Bouake, against an army mutiny, as popular opposition to the three-day nationwide revolt over bonuses gathered momentum.

Mutinous soldiers opened up access to the city, a leader of the uprising and Bouake residents said, allowing vehicles to move in and out for the first time since Friday.

The mutiny began in Bouake and spread quickly to other cities and towns, mirroring a similar January uprising by the same group.

The soldiers, mostly ex-rebel fighters who fought to bring President Alassane Ouattara to power, cut off access to Bouake, defying the army chief, who threatened severe punishment if they did not return to barracks.

The defence minister vowed not to negotiate with renegade troops.

Heavy gunfire erupted in Bouake’s city centre on Sunday as soldiers sought to disperse crowds of residents attempting to organise a march against the mutiny.
“The population rose up, but the mutineers quickly dispersed the march with shots,” said Bouake resident Simon Guede. “Everything is closed. No one is in the streets except soldiers and a few protesters.”

A witness saw five people brought to the city’s main hospital with bullet wounds following the aborted march. Two other protesters, who had been beaten, were also being treated.

Three people were shot and wounded by mutineers on Saturday.

Sergeant Seydou Kone, a spokesman for the mutiny, confirmed to Reuters soldiers dispersed the crowds on Sunday but said he was not aware of injuries.

Similar rallies and marches were held in Korhogo and Daloa and in the commercial capital Abidjan on Saturday. More were expected on Sunday.

Under pressure from angry truck drivers and travellers, unable to enter or leave Bouake since Friday, mutineers began allowing traffic to circulate on Sunday morning.
“We have nothing against the population,” Kone said. “We just want our money. We will be here until the president pays us. We control the entrances to the city and we can close them whenever we want.”

Witnesses and a local lawmaker confirmed vehicles were moving in an out of the city, on the main road axis between Abidjan, one of the region’s largest ports and landlocked neighbours Mali and Burkina Faso.