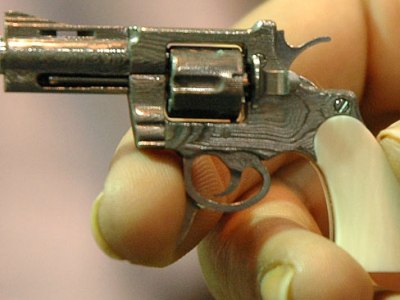 A chain of electronic stores in parts of the states of Idaho and Montana are offering free guns to first-time subscribers of satellite TV services.

The new promotions by combination RadioShack and Dish Network dealerships in western Montana and another in southwest Idaho have attracted crowds that range from the merely curious to the firearm-friendly.

John Marshall, owner of a RadioShack store in Mountain Home, Idaho near Boise, said the flagging economy was behind the program he began advertising this week, Reuters reports.
“There’s no problem with it here; this isn’t New York City,” he said about a gun giveaway that has sparked criticism on blogs by gun-control advocates elsewhere.

Under the arrangement, new subscribers to a Dish Network package are given a coupon for US$135 (83 pounds) to purchase a single-shot shotgun at a local sporting goods store.

The guns-for-subscriptions offer is the brainchild of Steve Strand, owner of a RadioShack store in Montana’s Bitterroot Valley.

Strand said the promotional campaign he crafted last fall has proved a sure-fire strategy to target satellite subscribers in a region that favours firearms. Subscriptions for Dish Network packages have increased threefold since he began offering freebies on pistols or shotguns.

Strand said women make up the majority of his growing customer base.
“All I can tell you is, grandma is packing a gun in Montana,” he said.

A RadioShack official questioned the promotion but the corporation has not prohibited it by franchise owners like Strand.
“I might not even consider such a program if I were in Detroit city but we have a different demographic out here,” Strand said.