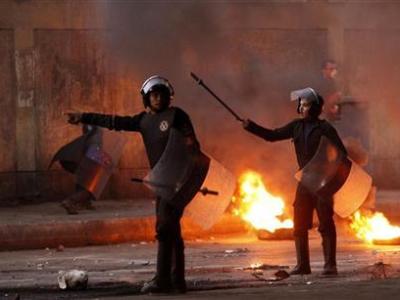 Security sources said at least 10 people had been injured, but the minister, who lives in Nasr City, just outside the city centre, was not hurt.

The minister, Mohamed Ibrahim, has been among those responsible for a violent crackdown on supporters of Mohamed Mursi, the Islamist president ousted two months ago by the army following mass protests against his rule, Reuters reports.

The security sources said a bomb had exploded near his convoy. The state-run Nile TV reported that Ibrahim had survived an assassination attempt. Initial reports suggested the device had been a car bomb but state TV later reported that it had been thrown from a building.

A Reuters reporter at the scene said witnesses had reported seeing a car explode while the minister’s car was close by. Blood and pieces of flesh were scattered on the ground.

The military-backed government that took over from Mursi has killed hundreds of supporters of his Muslim Brotherhood, which it accuses of inciting violence and committing terrorist acts, and arrested most of its top leaders. Around 100 members of the security forces have also been killed.

The Brotherhood denies the allegations and accuses the army of staging a coup and trying to return Egypt to the repressive era of former president Hosni Mubarak. It says it is committed to peaceful resistance.

Egypt faced an Islamist insurgency in the 1990s, when bombing and shooting attacks destabilized the country and hurt tourism.