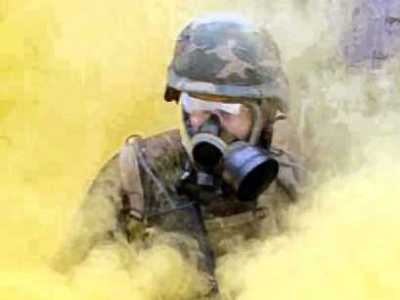 US intelligence agencies are reporting that forces loyal to Muammar Gaddafi have stepped up security around Libya’s principal remaining stockpile of agents used in chemical weapons.

But US agencies are unsure they know where all of the Libyan chemical stockpiles are located, officials said.

By the same token, international experts say that years ago, Libya destroyed most if not all of the weapons systems which would enable troops to fire chemical agents in combat. This means that even if some of the agents were pilfered, it would be hard for those who stole them to use them.

An official familiar with US government analyses said on Wednesday Washington had indications that in recent days security around the main chemicals cache had been “upgraded.” Officials declined to say how the US knows security had been improved.

US officials declined to identify where the remaining chemicals are stored or specify the nature of the security improvements that the United States had learned about.

But one of the officials said US agencies believe the security upgrade was made by forces loyal to Gaddafi rather than opponents of his embattled government.

International monitors have reported the chemicals are stored far away from Tripoli. A senior Pentagon official told Congress in 2006 that they were stored at a remote desert location about 375 miles (600 km) from the Libyan capital.

Still, another US official warned it was “not entirely clear that the Libyan government is in full control of all the remaining stockpiles.”

US officials, who asked for anonymity when discussing sensitive information, said Washington lacks complete confidence about the security of all of Libya’s chemical caches because it is possible some material could be stored in locations unknown to US intelligence.

Michael Luhan, a spokesman for the Organisation for the Prohibition of Chemical Weapons (OPCW), an international watchdog based in the Netherlands, said his agency could not confirm whether the security of Libya’s remaining chemicals stockpile had recently been bolstered.
“We have seen nothing to indicate that security has changed,” Luhan told Reuters, adding that his agency’s mandate “is inspection and verification rather than security, which is the responsibility of the government concerned.”

Last month the OPCW reported that, in 2004, Libya destroyed its inventory of aerial bombs that could be used to deliver chemical agents.

It also said that Gaddafi’s government last year had destroyed a large amount of mustard gas — about 54 percent of its stockpile — and agreed to destroy the rest by this May.

Given the lack of delivery mechanisms, experts question whether the chemicals pose much of a threat.
“The gas isn’t weaponized and I doubt if it could be within a military significant timeframe,” a former Western government official said. “The residual stocks of mustard gas are probably badly degraded and as much of a threat to those holding them as to any potential targets.”