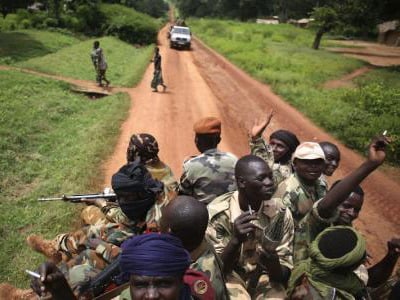 rRebel fighters and armed Muslim civilians killed “many” people in an attack on a church compound in the Central African Republic on Monday where thousands of civilians had taken refuge, Catholic Church officials said.

The attack in Bambari, 380 km (236 miles) northwest of the capital Bangui, came just a day before French Defence Minister Jean-Yves Le Drian was due to visit the town, where a grenade attack injured seven French soldiers last week.

Church officials said fighters from the Seleka rebel movement and armed civilians from the town’s Muslim community entered St. Joseph’s Cathedral around 3 p.m. (1400 GMT).
“We don’t have the exact death toll yet, but many people have been killed. As I’m speaking to you, they are still there,” the Rev. Jesus Martial Dembele, vicar general for the archdiocese of Bangui, told Reuters.

Between 4,000 and 6,000 mainly Christian civilians live at the cathedral, church officials said.

The Rev. Firmin Gbagoua, a priest at the cathedral, said the attackers believed that Christian militia fighters, known as anti-balaka or anti-machete, were based inside.
“They came in. They are killing people,” a nun inside the compound told Reuters during the attack before quickly hanging up the phone. Further attempts to reach her were unsuccessful.

A Seleka official told Reuters the group had been attacked by anti-balaka fighters in a majority Muslim neighbourhood. One Muslim civilian was killed in the clash, he said.
“All we did was retaliate,” said Ahmat Negad, one of the group’s spokesmen in Bambari.

The Catholic Church’s Dembele accused the French forces of not stepping in to prevent the attack.

However, a French military spokesman said French troops had intervened around 4 p.m. (1500 GMT) and took up positions between a mainly Muslim crowd including Seleka fighters and a large group of Christians when they came under small arms fire.
“We immediately returned fire and in all likelihood inflicted losses on that group,” the military spokesman, Gilles Jaron, said. He declined to say by which group he believed the shots had been fired. “Currently we are present around the bishopric to protect that population,” he said. A resident of Bambari said a French military helicopter was flying over the town by late afternoon.

ALONG A FAULT LINE
“To avoid clashes between groups that seek only hatred and vengeance, these groups must accept a peace process, accept a ceasefire,” Le Drian, the French foreign minister, who arrived in Bangui on Monday, said in reference to the worsening violence in Bambari.

Bambari sits on a fault line that has emerged across the country, where over a year of violence has killed thousands, forced a million from their homes and sent most Muslims fleeing into northern zones closer to Chad and Sudan.

At least 22 people were killed there in fighting last month.

The violence stems back to the takeover of the majority Christian country last year by the mostly Muslim Seleka rebel group, whose time in power was marked by a string of rights abuses that spawned the Christian militia.

Seleka stepped down earlier this year under intense international pressure. But a weak interim government has failed to stamp its authority on the country and violence continues despite the presence of about 6,000 African Union peacekeepers and 2,000 French soldiers.

French soldiers also make up part of a European Union military force deployed in the capital.

In addition to the seven French soldiers injured in Bambari on Thursday, three others were injured in another grenade attack in Bangui the following day as they were assisting Central African forces attempting to arrest the leaders of armed groups.