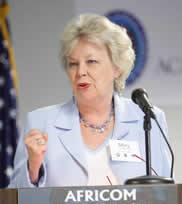 West Africa has seen an “absolutely shocking” increase in narcotics trafficking, which disrupts local communities and threatens the entire region
“It is absolutely shocking what has happened — the increase in drugs,” Ambassador Mary Carlin Yates says. Yates was US ambassador to Ghana from 2002 to 2005. She is now US Africa Command`s (Africom) deputy to the commander for civil-military activities.

Since her departure in 2005, West Africa has seen a dramatic increase in narcotics trafficking, with an estimated $2 billion worth of cocaine crossing the mid-Atlantic from South and Central America. A majority of the drugs passing through West Africa are headed for Europe.

The UN Office on Drugs and Crime (UNODC) estimates at least 50 tons of cocaine transits through West Africa each year. Local communities are increasingly disrupted because drug traffickers pay their transport costs in cocaine instead of money, increasing the amount of narcotics available to populations.
“This is more than a drug problem — It is a threat to public health and security,” UNODC’s executive director, Antonio Maria Costa, said during an international conference in October, 2008 in Cape Verde.
Yates said that the United States has found that in counter-narcotics, it is crucial to coordinate between agencies and ministries, as well as to partner internationally.
Yates met with reporters after visiting the USS Nashville, a US Navy ship that is touring West Africa for five months as part of Africa Partnership Station, an initiative to promote increased international cooperation in maritime security.

In Ghana, as part of a larger US government program, US Africom is helping to fund drug screening equipment and upgrades at Ghana’s international airport to support Ghanaian counter-narcotics and customs programs.

Africom also is helping to fund a police evidence storage and training facility to provide more capacity in storing evidence in support of counter-drug operations. The goal is to assist in achieving a greater number of lawful convictions. The facility includes a training center and computer lab, with estimated completion this summer.

Before arriving in Ghana, Yates visited Cape Verde where she talked cooperation in counter-narcotics, illegal fishing, and illegal trafficking.

Yates is meeting with a range of officials to discuss how regional militaries can cooperate in partnership with police and other security organizations to address the growing trend of illegal narcotics, illegal fishing, and other criminal maritime activities.

International cooperation to counter illegal maritime activities benefits the entire region, Yates told Cape Verdean reporters. “This will be positive I think for building more economic prosperity and to assist these nations in developing their societies,” she said.

Cape Verde is a chain of Portuguese-speaking islands about 450 kilometers off the west coast of the African continent. About 500 000 people live in Cape Verde, and another 500 000 Cape Verdeans live in other nations. Fontes Lima, the defense minister, said Cape Verde lies on a major mid-Atlantic corridor connecting South and Central America with West Africa and Europe. For this reason, she said, her nation must work closely with other African and European and American nations on maritime security issues.

Yates said she was just returning a visit to Miami, Florida, where she and other senior Africom officials visited US Southern Command (Southcom), the headquarters that coordinates America`s military relationships with Latin America.

For more than two decades, Southcom has worked closely with other US government agencies to address the flow of illegal drugs into the United States. In recent years, illegal trafficking and drugs have increased across the mid-Atlantic into West Africa and into Europe, propelling in part by the strength of the European currency compared to the US dollar.

Yates said the United States has found that countering the flow of narcotics and other criminal activity requires close cooperation between different branches and agencies of the government, as well as partnerships and coordination with other governments.

US military legal officials are working with Cape Verde to strengthen maritime laws with regard to illegal fishing and trafficking in Cape Verdean waters. In addition the US is providing funds for Cape Verdean personnel to travel to Ghana to attend maritime security training provided by the US Navy and Coast Guard.

In a project coordinated by the US Embassy, the United States and Cape Verdean governments are building a Counternarcotics Maritime Security and Interagency Fusion Center (CMIC) in the Cape Verde capital, Praia, to be run by local personnel to better coordinate maritime security and law enforcement.

Turkey and Russia on the Rise