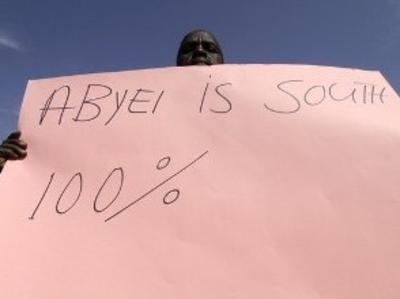 Tens of thousands of residents in the remote and disputed Abyei border region voted on Monday in a non-binding referendum on whether to join Sudan or South Sudan despite fears it could trigger violence.

The ownership of Abyei was left undecided when South Sudan declared independence from Sudan in 2011 and a long-promised official plebiscite on its status has been stalled by arguments over can vote, prompting the local referendum initiative.

The chairman of the referendum commission said he expected a unanimous vote in favor of joining South Sudan – a decision sure to antagonize heavily armed, pro-Sudan Misseriya nomads who drive their livestock through the region.
“Our impression is the turnout is high. On Sunday, the first polling day, the main station recorded that 75 per cent had already cast their vote,” said the commission chairman, Monyluak Kuol.

Local women celebrated the event with ululations and men proudly displayed a blackened finger to show they had voted. Nearly 65,000 people are registered to take part in the referendum, which ends on Tuesday

The result, expected on October 31, is not legally binding and both Sudan and South Sudan have said they will not recognize it, but the vote is important for the majority in Abyei who identify ethnically, culturally and religiously with the South.

Dinka Ngok people from South Sudan and even from as far away as Australia have returned to take part in the vote.

The United Nations has a 5,000-strong, mainly Ethiopian peacekeeping force deployed to monitor tensions between the nomads and residents in the region, which has small oil reserves and has seen several clashes between Sudanese and South Sudanese troops.

In Abyei town, many buildings are still without roofs and many families live in a makeshift tent city, a legacy of the past fighting.

Abyei’s senior Roman Catholic priest Father Carlos Kaw said the local people had been traumatized by repeated attacks by Sudanese-backed militias and felt the world had forgotten them.
“Abyei is fed up with waiting,” he said.