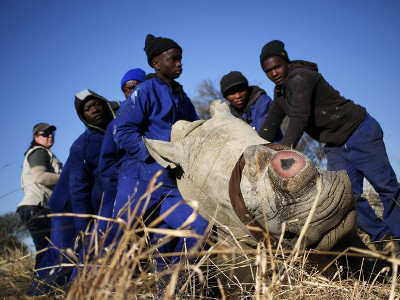 South Africa’s first legal auction of rhino horns opened for bids yesterday and 264 horns went on sale after the owner of the world’s biggest private rhino herd won a court case against government.

The rhinos were tranquillised before their horns were harvested making the operation painless. It takes up to two years for the horns to grow back, said Pelham Jones, chairman of the Private Rhino Owners Association.

A court handed down the order on Sunday to allow the online auction to go ahead after government delayed handing over the permit to rhino owner John Hume. Bidding is scheduled to close at 1300 GMT on Friday.

South Africa is home to more than 80% of the world’s rhinos, whose population has been devastated by poaching for buyers in Vietnam and China where it is coveted as an ingredient in traditional medicine.

Hume, who owns 1,500 rhinos on his farm south-east of Johannesburg, has built up a stockpile of rhino horn as he regularly cuts them off to protect against poachers.

Global trade in rhino horn is banned under a United Nations convention. Any horn acquired legally in South Africa could not be exported but conservationists expressed concern about domestic buyers illicitly supplying Asian markets.

Hume said he needs to sell horn to afford spiralling security costs which include armed patrols, helicopters and electric fencing.