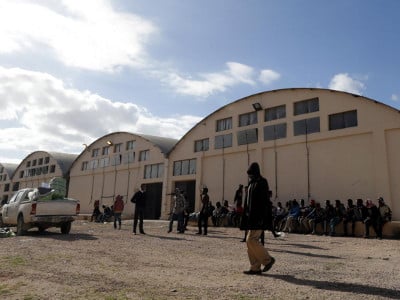 Authorities in eastern Libya said arrested and said they would deport 81 migrants from Eritrea, Ethiopia and Somalia who escaped from smugglers after failing to reach Europe.

The migrants were reported to authorities by an imam at a mosque on the coast to the south of Benghazi, officials said.
“They were arrested in the Zueitina area at a camp of illegal migrants,” said Ahmed al-Arifi, an official from the department for countering illegal migration in Benghazi. “They were arrested for deportation back to their countries.”

Libya is the main departure point for migrants trying to reach Europe by sea, with nearly 120,000 crossing the central Mediterranean last year.

Almost all leave from western Libya, though departures dropped sharply in July last year when armed factions began blocking crossings. Most migrants are from West African countries, though some East Africans enter Libya through Sudan.

One Eritrean migrant, speaking at a detention centre in Benghazi, said he arrived in Libya in March last year from Sudan, after paying $4,000 for the journey.

He was taken across the Sahara desert to the smuggling hub Sabratha and waited there with other migrants for about four months before being told the sea route was closed.

Armed groups began preventing boat departures in Sabratha in July, and a major smuggling group was pushed out of the city in September.

The Eritrean said he then crossed back through Bani Walid to Ajdabiya in the east, close to Zueitina. Smugglers demanded another $2,000 for the trip to Europe, but he was unable to pay and fled mistreatment at their hands.
“I wanted to go to Italy to work but it wasn’t possible,” he said. “We suffer from severe poverty in our country and there’s a dictatorial system.
“Now because we were treated badly by smugglers we suffer illnesses and skin diseases. We don’t want to return to our country, we want to go to Europe.”