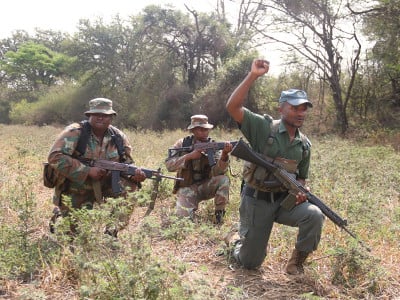 The importance of the Reserve Force to specifically South African Army taskings is borne out by their contribution to Operation Corona, the national border protection effort.

In the 2014/15 financial year close to 65% of the 22 600 personnel that make up the Army Reserve was called up for an average of 183 days each – just over six months. The latest Department of Defence annual report points out “they were mostly used in borderline safeguarding to complement the regulars”.

In her foreword to the report, Defence and Military Veterans Minister Nosiviwe Mapisa-Nqakula states: “At home the defence force continues to deploy 13 sub-units for border safeguarding duties. These 13 sub-units must be expanded to 22 to execute the full border safeguarding requirement. But due to budgetary constraints, we have not met this expanded requirement. It is our intention to expand this by an extra two sub-units in this financial year”.

At the time of publication no extra sub-units (companies) had been deployed but indications are the extra manpower to boost border protection will come from the SA Army Reserve.

Another warning on the need for more boots on the ground to up the border protection stakes comes from SA National Defence Force Chief, General Solly Shoke.

His introduction to the annual report reads, in part: “With the footprint of a number of sub-units on the borderline, it has always been the assertion of the Military command council that such footprint (of sub-units) is by far not enough to safeguard our borders. For this reason the SANDF will generate forces over time to reduce and eliminate the porosity of our borders”.

At any one time there are about 2 200 soldiers deployed on border protection along all six of South Africa’s landward borders with Botswana, Lesotho, Mozambique, Namibia, Swaziland and Zimbabwe.