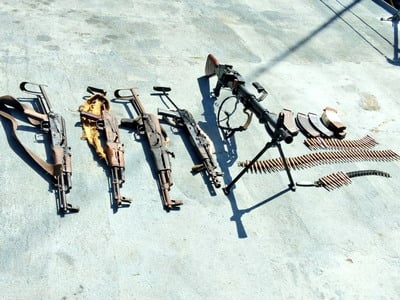 The Indian Navy’s patrol vessel INS Sunayna has seized arms and ammunition from an illegal fishing vessel off the Coast of Somalia.

The vessel, on an anti-piracy patrol in the area, spotted a suspicious fishing vessel some 25 nautical miles off the coast of Somalia on 7 December. According to Indian Navy spokesperson Captain DK Sharma, when the vessel was searched it was found to be engaged in illegal fishing in the area and was also in possession of four AK-47 assault rifles and one light machine gun, along with ammunition for these weapons.

The vessel was allowed to proceed after the weapons and ammunition were seized to prevent pirate activity.

The previous month, on 9 November, the INS Sunayna seized two AK-47 and AKM rifles, ammunition, grapnels and oil drums from suspicious boats some 400 nautical miles off Mogadishu. No fishing gear was found on them, indicating they were involved in pirate activities. The boats were released once the weapons were confiscated.

Earlier this year in April, the Indian Navy’s stealth frigate INS Trishul foiled a piracy attempt against the Indian bulk carrier MV Jag Amar in the Gulf of Aden.

Meanwhile, in West Africa incidents of piracy continue. According to the International Maritime Bureau, on 23 November armed persons boarded a fishing trawler underway off Idenao, Cameroon, and kidnapped two crew members before escaping. The remaining crew sailed the vessel to a safe port.

On 4 December the MV Saavedra Tide support ship was attacked by pirates off the coast of Nigeria but the crew retreated to the citadel and were unharmed.

According to the International Maritime Bureau, for the first nine months of 2018 there were 41 effective attacks and attempted attacks on ships in Nigeria and 57 in the Gulf of Guinea. A total of 156 incidents were reported globally.