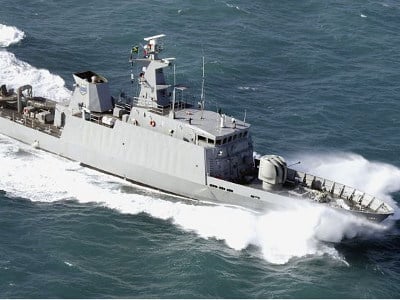 The Angolan Navy will apparently not receive Macae class vessels from Brazil as had originally been agreed in September last year, due to a shortage of funds.

According to Brazil’s Naval Power publication, negotiations on the purchase of the vessels have ceased as Angola does not have sufficient funds to pay for them, with “no prospect” of a resumption in negotiations.

Although Angolan defence spending has risen dramatically in recent years, and was last year estimated to go from $6.5 billion to $13 billion by 2019, the sudden drop in oil prices appears to have affected the country’s defence procurement plans as Angola relies on oil for half of its GDP. Due to the price drop, Angola is estimated to lose over $10 billion in revenue this fiscal year and in its February budget halved capital expenditure.

In September 2014 the Brazilian and Angolan defence ministers signed a Technical Memorandum of Understanding (MoU) covering the production of the Macae class vessels as part of Angola’s Naval Power Development Programme (Pronaval).

The Brazilian Navy’s Empresa Gerencial de Projetos Navais (Emgepron) was scheduled to produce four of the vessels in Rio de Janeiro while the other three were to be manufactured in a new Angolan shipyard to be built 200 km south of the Angolan capital Luanda.

The Macae class is based on the French CMN Vigilante 400 CL54 and has a displacement of around 500 tons, length of 54.2 metres, beam of 8 metres, an endurance of ten days and a complement of 35. The vessels are powered by two MTU Friedrichshafen 16V 4000 M90 diesel engines coupled to controllable pitch propellers, giving a top speed of 21 knots and a range of 2 500 nautical miles at a cruising speed of 15 knots.

Brazilian vessels can carry rigid hull inflatable boats (RHIBs) at the stern and and are armed with an Allied Ordnance of Singapore L70 NADM 40 mm gun and two 20 mm Oerlikon GAM-B01 cannons.

Brazil and Angola enjoy a strategic relationship as they both need to monitor the South Atlantic Ocean. The two countries, along with 23 other African and South American nations, are signatories of the Zone of Peace and Cooperation of the South Atlantic (ZPCSA), a multilateral organization created by the United Nations (UN) in 1986, and which aims to prevent the introduction of nuclear weapons and weapons of mass destruction in the region.

Defence ties between Angola and Brazil were further cemented with the recent acquisition of half a dozen Super Tucano aircraft from Embraer in 2013.