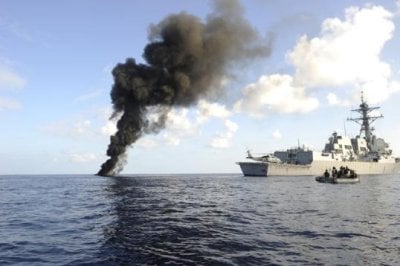 The head of the United Nations maritime agency yesterday in the Kenyan port city of Mombasa commissioned the first of three planned information-sharing centres designed to help fight the growing scourge of piracy in the Indian Ocean and the Gulf of Aden, the UN says.

The centre in Mombasa, which was opened by Efthimios E Mitropoulos, the Secretary-General of the UN International Maritime Organization (IMO), is co-housed with the Regional Maritime Rescue Coordination Centre (MRCC), which operates on a 24-hour basis and covers extensive areas of the western Indian Ocean.

The centres are being established under the Djibouti Code of Conduct on the Repression of Piracy and Armed Robbery against Ships in the Western Indian Ocean and the Gulf of Aden, the maritime regions most affected by pirates who set off from Somalia.

The code of conduct, which took effect in 2009, is designed to strengthen cooperation in the fight against piracy. It provides for the creation of the three information centres in Mombasa, Dar es Salaam in Tanzania and Sana’a in Yemen, as well as a training centre for anti-piracy units in Djibouti. It also calls for states in the region to make the necessary changes in their legislations to facilitate the arrest and prosecution of piracy suspects.

The information-sharing centres will ensure coordinated, timely, and effective flow of information, according to IMO. They will be capable of receiving and responding to alerts and requests for information or assistance at all times.

Countries reporting to the Mombasa centre include the Maldives, Seychelles, Mauritius, Kenya and, at a later date, Somalia. The centre will exchange information on the movement of pirates with the centres to be established in Sana’a and Dar es Salaam, as well as with European Union Naval Force (EUNAVFOR), the United Kingdom’s Maritime Trade Operations and the Maritime Liaison Office in Bahrain.

Speaking to staff at the Mombasa centre, Mitropoulos paid tribute to their services in the search and rescue efforts, and expressed hope that they will be equally successful in discharging their responsibilities under the piracy assignment to them.

The UN officially opened the Hargesia prison in Somaliland several days ago as part of its wider anti-piracy efforts, and plants to build two more 500 capacity prisons over the next few years. One will be in Garowe, the capital of Puntland, according to China Post. In addition, the UN is building a 60 capacity prison in the Seychelles.

Cases of piracy have risen dramatically over the last several years – between 2000 and 2007 there were 26 acts of piracy a year off the Somali coast, but 111 were recorded in 2008 and more than 400 occurred in 2009 and 2010. Last year 790 crewmembers were taken hostage.
17 countries are prosecuting pirates, and have convicted 950, including the United States, which this month sentenced five pirates to life in prison. However most nations would prefer to hand the problem over to Somalia. Earlier attempts at using Kenya to prosecute and hold pirates bogged down when a Kenyan court ruled against prosecuting more pirates brought in by foreign countries.

Somali pirates are currently holding 28 hijacked ships and 576 crewmembers, according to the International Maritime Bureau.