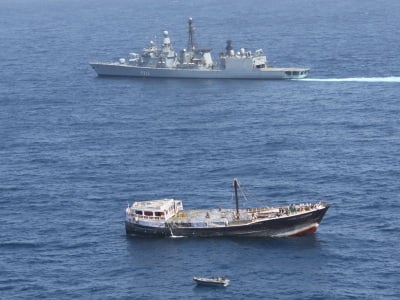 The Royal Fleet Auxiliary (RFA) ship Fort Victoria has rescued a dhow from 14 suspected Somali pirates and returned it to its rightful Yemeni owner, while the European Union Naval Force ship FGS Luebeck has released an Indian dhow and its 15 crew from Somali pirates.

The Yemeni fishing dhow, which was recovered from suspected Somali pirates on 13 January, had been hijacked and held in a known pirate camp ashore. Awadh Barasheed, the owner of the dhow, said that, “I am happy to receive my dhow back after being pirated since 18 May 2011. I would like to thank the coalition forces and specifically the British Navy for retrieving my dhow from the hands of the criminal pirates. This dhow is the only source of income for me, my brothers and our families.”

Royal Navy and Royal Marines personnel embarked on RFA Fort Victoria were able to hand back the dhow in international waters in the Gulf of Aden.

Captain Gerry Northwood, Royal Navy, Commander of the UK Counter-Piracy Task Group, said that, “The dhow was handed to the captain of Yemeni Navy ship 1031 and the agent acting on behalf of the dhow’s owner. This was an excellent example of the Royal Navy and the Yemeni Navy working together for the common good of the local maritime community.”

Meanwhile, the international coalition of warships patrolling the Indian Ocean for pirates assisted another dhow. On January 17 the EU Navfor Bremen class frigate FGS Luebeck re-located an Indian registered dhow that had been used as pirate mother ship involved in the attack on the M/V Flintstone early the same day.

A Dutch Vessel Protection Detachment (VPD) stationed on the M/V Flintstone, a Dutch-registered civilian fall-pipe vessel, had repelled the attack following a gunfight, and caused the attack skiffs to retreat back to the pirate mother ship with injuries.

After identifying the dhow as a pirate mother ship, FSG Luebeck approached it and hailed it via radio. However, the vessel did not react to radio calls or to warning gunshots. As a result, the FGS Luebeck fired direct shots into the dhow’s bow while its helicopter neutralised the attack skiffs on the dhow’s upper deck, the EU Navfor says.

During the night of January 19, FGS Luebeck arranged for the M/V Enrico Ievoli, an Italian tanker which had been pirated in December 2011 with 18 hostages onboard, to rendezvous with the Indian dhow. The pirates threatened that they would harm all the hostages if any military action was taken to prevent a transfer of pirates who had been injured during the initial attack on the M/V Flintstone.

After the pirates had been transferred, personnel from the FGS Luebeck boarded the Indian dhow to assure the health and safety of the crew as well as provide technical assistance. The 15 released crewmembers were all in good health. The EU Navfor said the Luebeck’s action denied the suspect pirates the use of the dhow as a mother ship and freed the crew from what could have become months of captivity. The Enrico Ievoli is being shadowed as it returns towards Somalia.

The EU Navfor assisted another dow on January 17 after it ran out of fuel off the Somali coast. The Spanish Combat Supply Ship SPS Patino, the flagship of Operation Atalanta, transferred fuel to the Iranian vessel. The 11 man crew of the vessel, which was carrying a mixed load of cargo, expressed their thanks to the European Union Naval Force (EU Navfor) team before departing en-route to the nearest port.

Two days later, the M/V Albrouj, a Yemeni dhow en route to Somalia from Yemen, hailed a helicopter conducting operations from the USS Halsey and indicated that they were in distress. The guided-missile destroyer, the flagship of Combined Task Force 151, launched two rigid hull inflatable to provide assistance. Two electricians from Halsey conducted an investigation along with Albrouj’s boat engineer, and discovered a faulty alternator and four dead batteries. The ship provided the dhow with two batteries to allow the crew to safely continue their voyage to Somalia.

Over the last two weeks, five pirate groups have been successfully disrupted in the Gulf of Aden and over fifty pirates are potentially facing the prospect of prosecution.