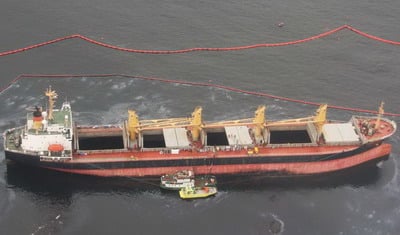 A cargo ship in the Arabian Sea that was hijacked yesterday was freed by combined US, Turkish and Indian forces today.

The Panama-flagged, Chinese owned cargo ship MV Full City was sailing 450 nautical miles (850 km) west of Karwar in Karnataka off the Indian Coast when it was attacked by pirates at 8:45 am yesterday.

The 24 Chinese crewmembers locked themselves in the ship’s ‘citadel’ or safe room and called for help. Indian Navy and Coast Guard vessels patrolling in the vicinity responded to the ship’s distress call. At the same time an Indian Navy Tupolev Tu-142 maritime patrol aircraft flew over the ship in an attempt to warn off the pirates.

Seven suspected pirates abandoned the ship, boarded a skiff and fled to a mother ship nearby, which fled from the scene at full speed, an Indian Navy officer said today. “As there were no surface forces in the immediate vicinity to board MV Full City and sanitise the ship, the Indian naval aircraft circled overhead MV Full City for over three hours, assisting the rescue operation by coordinating with the NATO Task Force.” The Tu-142 only left the scene as Turkish and US Navy ships arrived and Turkish commandoes boarded the vessel to make sure there were no pirates on board.

The Chinese Task Force and the Maritime Rescue Coordination Centre in Beijing assisted in the operation, highlighting international cooperation between India, Turkey, the US and China. The China Sea Rescue Centre had reported that two Chinese navy ships patrolling in the Gulf of Aden were alerted to the hijacking and changed course for the MV Full City.
“MV Full City was saved from getting hijacked by the very prompt action of the Indian naval aircraft,” the Indian officer said. “The Chinese Task Force also thanked the Indian Navy for its prompt and persistent action leading to the pirate attack on MV Full City being repelled,” he added.

Somali pirates have made three unsuccessful hijacking attempts this month, according to the International Maritime Bureau. They are currently holding around 30 ships and 500 hostages.