Paramount Group has been awarded a multi-million dollar contract for the production of the combat vehicles in Jordan.

Paramount Group, Africa’s largest privately-owned defence and aerospace business and Jordan’s state-owned defence company, the King Abdullah II Design and Development Bureau (KADDB) has today signed a major contract for the production of the world’s most advanced armoured combat vehicles, the 6×6 Mbombe infantry combat vehicle, which is specifically designed to meet the demands of modern conflicts around the world.

The contract for the production of the first 50 Mbombes was signed by the CEO of KADDB, Major-General Omar Al Kaldi and the Chairman of Paramount Group, Ivor Ichikowitz at IDEX 2015, the largest defence expo in the Middle East.

CEO of King Abdullah II Design and Development Bureau (KADDB), Major General Omar Al Kaldi said: “The production of Mbombe in Jordan signals an important milestone in the continuing growth of the defence industrial capability in the Middle East.The Mbombe is a world-class product that is optimally suited for the requirements of defence forces in the region. The Mbombe will become the platform for the future 6×6 requirements of the Jordanian Armed Forces. By integrating our technologies, engineering skills and know-how we are looking forward to bringing innovation to the industry.”

Ivor Ichikowitz, Founder and Executive Chairman of Paramount Group said: “We are extremely privileged by Jordan’s decision to select the Mbombe 6×6 for its armed forces. Jordan has a strategic position and role in the Middle East in building stability and security across the region.

“Paramount Group and the Jordanian defence industry have a long history of collaboration and we are very excited to support the development of a defence industrial base in Jordan that will contribute to employment, skills development and technology transfer and training. This is an important milestone for Jordan and South Africa’s defence collaboration.”

The signing of the contract follows an extensive programme of vehicle trials comprising 50°Celsius desert environments in Jordan and the UAE, to -50° Celsius during winter trials in Kazakhstan. The Mbombe successfully completed the rigorous trials and in the process covered more than 10 000km in the world’s most harsh and challenging environments.

The South African developed Infantry Combat Vehicle, Mbombe, represents the latest in armoured and land mine protected technology in the world. The Mbombe is a six-wheeled vehicle that employs a ground-breaking new form of construction technology offering outstanding protection, mobility and firepower. It is designed to provide unrivalled protection against landmines, IEDs, side blasts and RPG attacks. 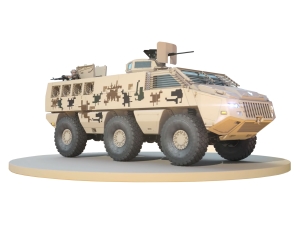 Ichikowitz added: “The nature of threats that armed forces in the Middle East are facing has intensified. Armed forces demand world-leading technologies and capabilities to combat these threats.

“The South African defence industry has become one of the most advanced developers of defence technologies in the world and Paramount Group today is the custodian of much of this technology. It has always been our philosophy to share technology, transfer skills and to assist countries in driving industrialisation and to create jobs. The signing of this contract provides us with the first concrete step in doing this here in Jordan.”

Production of the 50 Mbombe’s will commence immediately with manufacturing taking place in Jordan and South Africa.