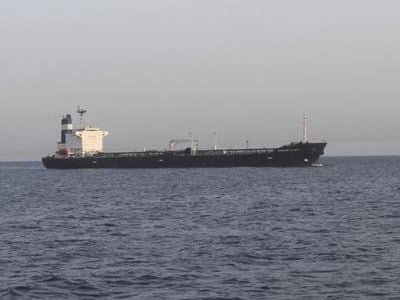 A Libyan warplane from forces loyal to the internationally recognized government bombed a Greek-operated oil tanker anchored offshore, killing two crewmen in an escalation of a battle between the country’s rival factions.

The air strike on Sunday damaged the Liberian-flagged ARAEVO that was carrying 12,600 tons of crude oil when it was off the eastern port of Derna, the Greek coastguard and Libyan officials said.

Military officials allied with Libya’s internationally recognized government said the vessel had been warned not to enter port and claimed it had been transporting Islamist militants to the city of Derna.

Greece condemned what it called an “unprovoked and cowardly” attack and demanded an investigation and punishment for those responsible.

Three years after the fall of Muammar Gaddafi, Libya is mired in a power struggle between two rival factions of former rebels who have established competing governments, both claiming legitimacy and control of vast oil resources.

Both sides have appointed rival officials to run the NOC state oil company and the oil ministry, leading to confusion over who controls which assets.

Athens-based Aegean Shipping Enterprises Co, which operates the vessel, said no oil had spilled as a result of the air strike. The vessel, which it said had been chartered by NOC, was loaded at Brega port for transport to Derna.

Ahmed Bu Zayad Al-Mismari, a spokesman for the government’s General Chief of Staff, confirmed the vessel was attacked by one of it warplanes.
“The ports of Derna and Benghazi were closed, and we have cautioned all oil tankers not to get close to these ports.”

The Greek vessel had not let officials know its destination and did not seek permission, he said. But an industry source said it was delivering gasoil to power generators that supply the cities of Derna, Khoms, Benghazi and Misrata.

The company said two members were killed and two wounded.
“There is no oil leakage, the ship’s integrity was not compromised. Damage is being assessed,” said safety manager Elias Syrros.

The Greek foreign ministry said it had contacted the United Nations special envoy for Libya and the European Union.
“The Greek government will take all the necessary actions towards Libyan authorities – despite the unrest – so that light is shed on the tragic incident, the attackers are identified and punished and the families of the victims are reimbursed,” it said.

Fighting over Es Sider and Ras Lanuf oil ports has slashed Libya’s oil output to 380,000 barrels per day compared with 1.6 million bpd produced before the 2011 war.

Sunday’s attack also illustrates the complex task facing U.N. and international mediators trying to a broker an end a conflict they fear may spillover its borders and facture Libya.

Since the war that ended Gaddafi’s four-decade rule, Libya has been battered by rivalries among competing factions of nationalist, Islamist, tribal and regionalist forces. But the conflict has emerged around two loosely aligned factions.

The internationally recognized government and elected parliament is based out of the eastern area around Tobruk, and it has allied itself with ex-rebel forces in Zintan town and a former Gaddafi army general Khalifa Haftar who is conducting a campaign against Islamists.

Tripoli is now controlled by a self-declared government set up by forces allied to the city of Misrata that drove out rivals from the capital over the summer, reinstating a former parliament and taking over ministries.

Most foreign governments pulled their diplomats out of the capital in the summer after weeks of fighting between Libya Dawn and rivals over control of Tripoli.