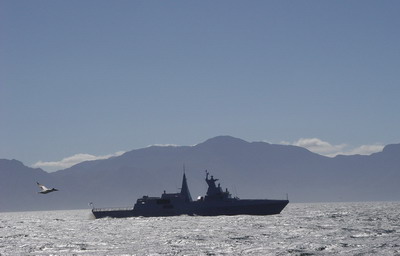 Germany and France are considering merging their naval shipbuilding assets in what would be their biggest industrial partnership since the creation of aerospace group EADS in 2000, a German newspaper reported.

ThyssenKrupp said its marine systems division was not holding any talks currently with DCNS on the merger of their marine shipbuilding operations.
“In addition, there are also no scheduled talks with DCNS,” it said in a statement.

The newspaper said the alliance would involve Germany’s biggest steelmaker ThyssenKrupp merging its military shipbuilding assets with those of DCNS.

ThyssenKrupp is reshaping its marine business and seeking to exit its civilian shipbuilding business.

Last month it scrapped a deal with Abu Dhabi MAR to set up a joint venture to sell naval surface ships in the Middle East and North Africa, blaming changes in the political landscape.

The paper said French diplomats based in Berlin had already initiated contacts with Gerhard Cromme, supervisory board chairman of ThyssenKrupp.

The management of ThyssenKrupp, DCNS and Thales had been told about the matter but the whole process was still at its initial stage, the report said.

Europe’s military shipbuilding industries are under pressure because contracts from the national navies are not enough to sustain them.

The newspaper said Paris has been pushing for a merger of the naval dockyards. It said French President Nicolas Sarkozy and German Chancellor Angela Merkel had already discussed the idea several times in the past.

Germany and France discussed such a merger years ago but failed to resolve some issues, such as who would assume the management role and which shipyards would be kept, the newspaper said.