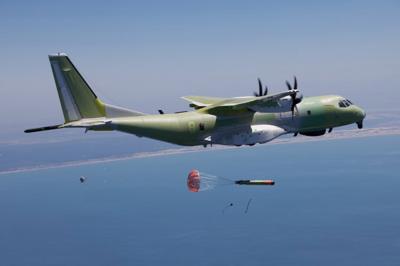 Airbus Military has successfully conducted the first torpedo launch from one of its C295 Maritime Patrol Aircraft (MPA). “This represents an important milestone in the development of the antisubmarine version of the C295 MPA,” the company says – and may impress the South African Air Force that has a requirement (Project Saucepan) for up to 13 MPA and maritime security aircraft.

It is also a significant entry for Airbus Military into the market of antisubmarine warfare (ASW) aircraft, currently dominated by veteran aircraft such as the P-3 Orion and the Dassault Atlantique, the company adds in a media release.

The C295 MPA/ASW includes two under-wing pylons for the installation of torpedoes and other external loads. It also incorporates a Store Management System (SMS), integrated with the Airbus Military Fully Integrated Tactical System (FITS), to control the deployment of sonobuoys for submarine detection and torpedoes.

Airbus Military adds the C295 platform, a multi-mission short/medium range tactical transport aircraft, offers high manoeuvrability and excellent qualities for low-altitude flying. In addition, it has been widely tested in all kinds of aerial deployments: launch of chains of SAR rafts, emergency equipment and parachutists.
“With this new version, Airbus Military increases the capabilities offered by its surveillance aircraft family,” the company says in the media release.